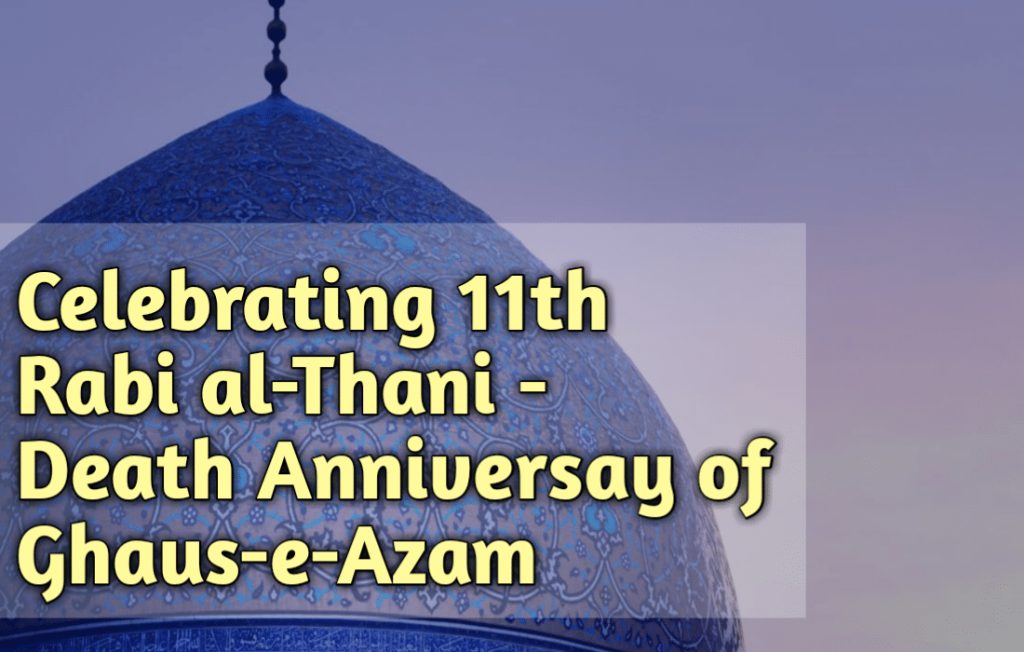 Al-Ghawth al-Azam Shaikh Abdul Qadir Jilani’s grandeur and splendor in the world of Sufism and Faqr does not require any introduction as his dignity and honor is brighter than the sun, and his attributes and virtues are countless. He is famously known in the world as al-Ghawth al-Azam (Ghaus-e-Azam) and also with numerous other titles such as

Reviver of the Religion

The birth of Ghaus-e-Azam razi Allah anhu is no less than a miracle. He rose like the sun in the era of ignorance and rubbed out the evils of the world with his favor and grace.  At the time of his manifestation, Muslims had been divided into 73 sects. He then brought new life to the religion of the Holy Prophet sall’Allahu alayhi wa’alihi wasallam and thus ended all the heretical practices. Hence for this reason, he was conferred upon the title of Muhiyuddin i.e. reviver of the religion. The status of Ghaus-e-Azam is so high that whoever calls his name for help, he instantly comes to guide him, and this will continue till the doomsday.

Association of the day of 11th

Ghaus-e-Azam holds such high rank and grandeur that anything that gains association with him also achieves the same high rank. One of such associations is the honored day of 11th (Gyarween Shareef). The 11th of every lunar month is associated with the sacred self of Ghaus-e-Azam. Thus, his devotees celebrate this day by reading khatam shareef (ritual of reciting the Holy Quran and salutations upon the Holy Prophet and then sending the rewards to deceased Muslims) and performing votive offerings.

Celebration of the Death Anniversary

“The death anniversary (Urs) of all other Saints is held only once every year but it is a distinguished grandeur of Ghuas-e-Azam that scholars of religion have set his anniversary on the 11th day of every month.”

“On the day of 11th, the king and the leaders of the city would gather at the sacred shrine of Ghaus-e-Azam. Following the afternoon (Asr) salat and till sunset (Maghrib) salat, they recited Holy Quran, eulogies, and also praises in honor of Ghaus-e-Azam. Then after sunset, the shrine caretakers (sajada nasheen) gathered in the middle and the disciples formed a circle around them, and hence the invocation began. Afterwards food (niyaz) was distributed and then people departed after night (Isha) salat.”

In view of above narrations, it is clear that even scholars, pious and the nobles celebrated the day of 11th.  Above all the Saints have always continued the celebration of his death anniversary in an extremely grand manner.

Celebration of 11th by the Sarwari Qadri Saints

All the Saints of Sarwari Qadri order have been celebrating this day associated with Ghaus-e-Azam with extreme reverence and respect. The honorable mother of present Shaikh of Sarwari Qadri order Sultan-ul-Ashiqeen Sultan Mohammad Najib-ur-Rehman also used to hold khatam sahreef on the 11th of every Islamic month.

Celebrating 11th is not an innovation

Man’s life is a blend of joy and grief. Sometimes grief encircles him and the other times it’s the joy. Thus, to keep these days in memory, he sets traditions that will remind the importance of these days to his coming generations. In an exact manner, to remember the special days associated with the pious men and the Saints, and to keep the coming generations connected with religion, the devotees of the Saints celebrate these days. This is so the coming generations become aspired of these dignified personalities and their reality and hence continue to gain beneficence from them. Doing so is not an innovation.

Rituals performed in the celebration of Gyarween Shareef

Arranging khatam shareef on the honored day of 11th is the most adored act. Because here devotees perform all such deeds which are a source of Allah’s consent, blessings of Holy Prophet and the special beneficence of Ghaus-e-Azam.

“There are ten rewards for the reciter on reciting each letter of the Holy Quran.”

“Whoever sent salutation on the Holy Prophet once, Allah will write ten rewards for him. He will also forgive his ten evils, will increase his rank ten times and will return his salutation upon him.” (Musnad Ahmad 5709)

Allah says the following in the Holy Quran:

Meaning: Verily, Allah and His angels send blessings and greetings on the Holy Prophet. O you who believe! Invoke blessings on him and salute him with a worthy salutation of peace abundantly (and fervently). (Al-Ahzab 56)

In the khatam shareef of 11th, the scholars of religion deliver speeches to acquaint the Muslims of today with the grandeur and the sacred self of Ghaus-e-Azam. These saintly men of Allah will become a source of salvation on the day of judgement for those who hold devotion with these pious men.

The rewards of all the virtuous acts performed in khatam shareef on the honored day of 11th are sent to all Momins (true believers) through the medium of Holy Prophet and Ghaus-e-Azam. This way these gatherings become a source of forgiveness and exalted ranks for others.

Therefore, the aforementioned Hadith substantiates that reciting khatam on food and distributing it among people is the Sunna of Holy Prophet.

Why would the devotees of Ghaus-e-Azam not celebrate the Gyarween Shareef in his remembrance when he protects them every moment! He is a guide, and a problem solver to them in their difficulties and will even help them in the throes of death and also on the doomsday.

Love of Sultan Bahoo for Ghaus-e-Azam

My spiritual guide is Shah Muhiyuddin who is the successor of the Holy Prophet. He (Ghaus-e-Azam) says:

“My disciple will not die but in a state of faith.”

“O my disciple fear not, as Allah is my Lord.”

Sultan Bahoo states a tradition in his book Mehak-ul-Faqr Kalan that the Holy Prophet said to Ghaus-e-Azam:

“O Muhiyuddin! My foot is on your neck and your foot will be on the neck of all the Saints.”

Hearing the revelation, all Saints came in the court of Ali ibn Abi Talib and said:

“The Holy Prophet have declared this announcement. What are your impressions about it?”

When Ali ibn Abi Talib requested clarification from the Holy Prophet, he said:

“O Ali! Mohiyuddin is my progeny and your descendent. It is not strange if a man lifts his noble and worthy son on his shoulders and puts his feet on his neck.”

On this Ali ibn Ali Talib gave Shaikh Abdul Qadir the honor first, then all the Saints accepted his foot on their neck and thus gained the honor of beneficence, sainthood, and guidance. (Mehak-ul-Faqr Kalan)

As the company of Fakir and his love bless Divine love. Thus, in summary, whoever keeps love and affection for Ghaus-e-Azam, gains his beneficence and whoever keeps malice against him and his disciples, ruins himself in world and hereafter.

May Allah grants us the favor to understand and act upon the truth. Ameen!

Note: The translation of this article is done using American English vocabulary.

This article was published in Mahnama Sultan-ul-Faqr Lahore (monthly Urdu magazine of Tehreek Dawat-e-Faqr) titled as سیّدنا غوث الاعظمؓ اور حقیقت ِگیارھویں شریف in the issue of December 2019. It was originally written by Mariam Gulzar Sarwari Qadri and is now translated in English by Sofia Sultan Sarwari Qadri. To read the original article, please visit:

Read about the preaching campaign of TDF.