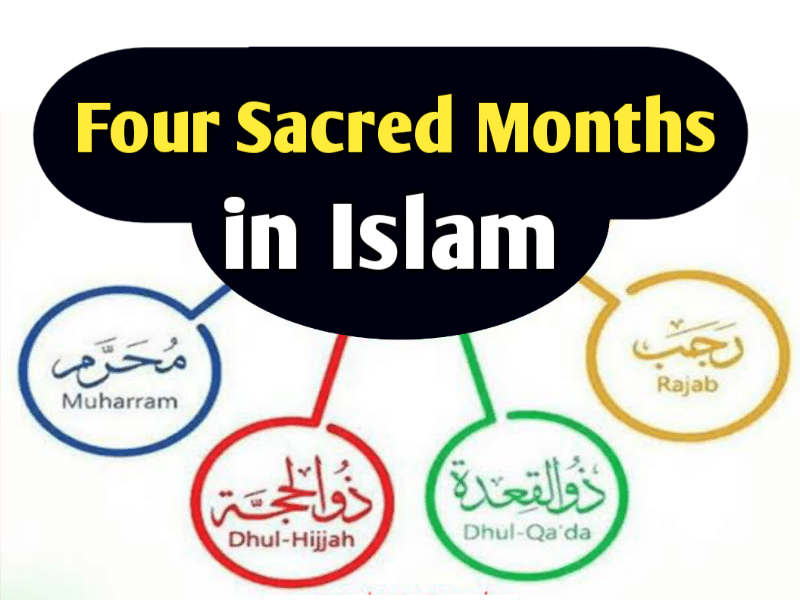 Allah says in the Holy Quran in sura al-Tawbah:

Indeed, the number of months with Allah has been (inscribed as) twelve in the Book of Allah (i.e., permanent law of nature) since the day He created the (system of) the heavens and the earth. Of these, four months (Rajab, Dhul al-Qadah, Dhul al-Hijjah and Muharram) are sacred. This is the right religion. So do not wrong your souls during these months (by involving yourselves in fighting and war), and fight against all the (combatant) idolaters (in retaliation) the same way as they all (allied) have imposed war upon all of you, and bear in mind that Allah is surely with the God-fearing.

Postponing and deferring (the sacred months in Islam) is just an addition to disbelief. By this the disbelievers are led astray; they, in one year, count it lawful and in another year regard it forbidden to complete the count (of the months) which Allah has made sacred and (they also) make that (month) lawful which Allah has declared unlawful. Their evil deeds have been made attractive to them, and Allah does not guide the community of disbelievers. (Al-Tawbah 36-37)

When did these months become sacred?

It is evident from the aforementioned sacred verse that since the time Allah started the phenomenon of day and night alterations by creating heavens and earth, four months are sacred near Him. For this reason, the respect of these months remained incumbent in the sharia of all prophets. Therefore, even before the commencement of Prophethood, Arabs adhered to the glory of these months. However, it was very unpleasant upon them when these months were to fall in between wars. Therefore, they began to adopt the habit of altering them. That is, if Muharram will fall during the war, they will exclude it from the sacred months and add Rabi al-awwal instead. That is to say, they continued to count the sacred months as four, but altered their names at their convenience. Their act hurt the glory of these sacred months.

Holy Prophet forbade to alter the sacred months in Islam

Prophet Mohammad, who remeberance has been exalted i.e.Warafana Laka Zikrak, in the sermon of al-Ḥajj al-Wada (farewell pilgrimage of Holy Prophet) declared the names of four sacred months in Islam and strictly forbade to alter them. Verse 37 of sura al-Tawbah warns that altering the sacred months is an increase in disbelief. The first disbelief is continuing the war in these months and second is to alter the months which Allah has designated to be sacred.

Look, the time has turned its form on the day Allah created the heavens and the earth. The year consists of twelve months, four of which are sacred in Islam. Three months are in sequences: Dhul al-Qadah, Dhul al-Hijjah and Muharram, while the fourth one is Rajab, which comes between Jumada ath-Thani and Shaban. (Bukhari 4662)

It is written in Tafsir Ahsan-ul-Bayan that the interpretation of ‘time has turned its form’ is that Arab polytheists who used to alter or delay these months have ended.

Allah forbade to fight in the sacred months

Allah has forbidden Muslims to begin war in these sacred months. However, they can respond and defend themselves when aggressed upon. Now this does not mean that they would refrain from major war but indulge in fight between themselves or with a non-Muslim. In fact, Allah prohibits them to indulge in any minor or major fight between themselves or with a non-Muslim and He restricts them to initiate the war. But in a situation of aggression, they are allowed to not only defend themselves but also fight back.

In the exegesis of verse of sura al-Tawbah, Ibn Kathir writes:

Thus, prevent yourself from committing sins in all twelve months, particularly in these four sacred months in Islam. They are highly glorified. The punishments of sins and the rewards of good deeds multiply in these months.

Allah chooses whom He wills

The punishments and the burden of sins is greater in these sacred months than in other months. While tyranny is a great sin anyways, but Allah magnifies what He wants. Among His creatures He chooses to like more whomever He wills. Allah has chosen certain ones of His creation. He chose prophets from angels and human beings. Similarly, He chose His dhikr (His remembrance) from among speech and chose the month of Ramadan and the sacred months, from the months. Likewise, He chose Laylat al-Qadar (Night of Decree) from the nights. Thus, venerate that which Allah has venerated. Not honoring what Allah has designated sacred is unlawful. Moreover, do not make it lawful which Allah has made unlawful and do not make it unlawful which Allah made lawful just as the polytheists do. (Tafsir ibn Kathir vol II)

According to verse 36 of sura al-Tawbah these four sacred months in Islam are sacred since the creation of heaven and earth. The important events occurred in these four months in different eras are not the reason of their glory. For example, it is commonly assumed that the sacredness of Muharam is due to the martyrdom of Husayn ibn Ali razi Allah anhu in this month or Dhul al-Hijjah is sacred because of the occurrence of Hajj and that Rajab is sacred because incident of Miraj occurred in this month. Indeed, these incidents enhanced the glory of these months, but they are not the reason of their sacredness. Quran (read Science and Quran) and Hadith do not cite the reason of their glory either. Allah chooses whom He wills. Thus, it is incumbent upon human beings to venerate what Allah has venerated.

Sacred months in Islam teach us to exhibit good morals and avert from anger, malice, grudge, envy, and fight. Thus, turn our inwards towards Allah and seek His gnosis. Run towards Him and strengthen our relationship with His beloved men and Saints. Go to their court and gain their guidance and beneficence.

Avoid fighting not only in these sacred months but also in all months. Gain gnosis of Allah and enlighten our inwards with the invocation of Ism e Allah Zaat. Ameen

Get the answers to your questions regarding Sufism.

in the issue of March 2020. Maimoona Asad Sarwari Qadri wrote the article originally and Sofia Sultan Sarwari Qadri has now translated it in English. To read the original article, please visit: