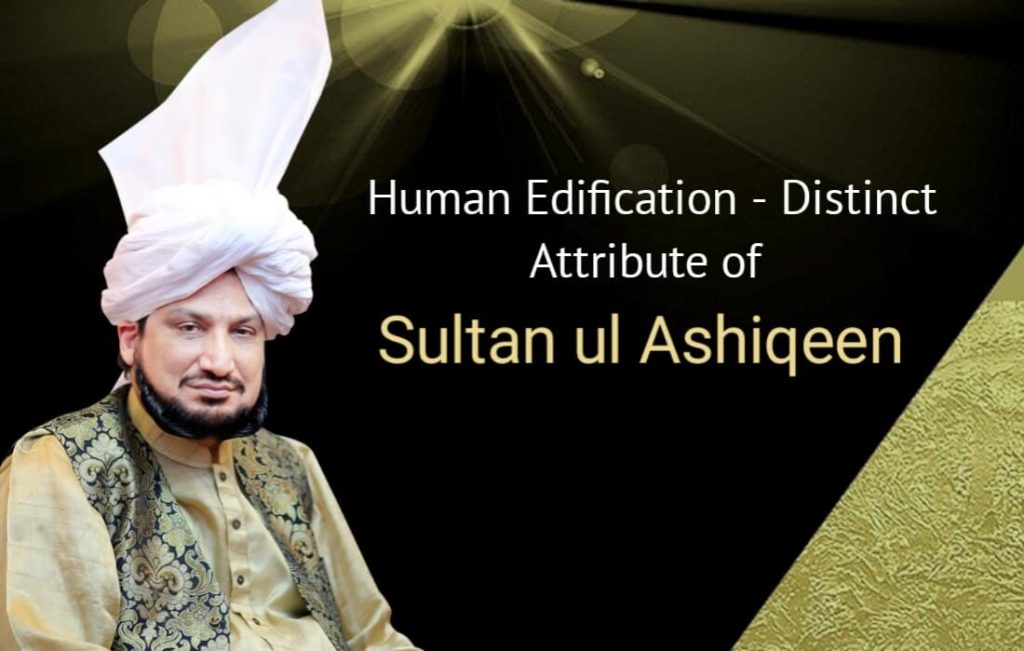 Human edification is the Sunna of the Holy Prophet. His edification made the cruel Arabs civilized so that they could be called a human. Who do we call a human being? The one who is best of all living beings, the most noble of all creatures or the one who is seduced by Satan? Or the one who kills his brother, the one who falls prey to lust, the one who made history of Yazidism and Pharaonic? After all, who is a human? Obedient servant of his Holy Lord or patriot or the one living in the circle of civilization? Or the humble slave of Allah who has feeling and sympathy? Sultan-ul-Ashiqeen Sultan Mohammad Najib ur Rehman has defined human in these words:

Infact real Miraj of human is to manifest Divine Essence. Not only Islam is a true religion but also a universal religion. The focus of teachings of Islam is the welfare of mankind.  Allah has sent one hundred and twenty-four thousand prophets for the edification of human and to make him aware of the ultimate height of humanity and let him achieve purpose of his life. The greatest example of edification and reformation of mankind is the sacred life of the Holy Prophet.

Before the advent of Prophet Mohammad in the land of Arabia, people were living a life of ignorance. On the basis of caste, color and race, one tribe considered itself superior to other tribes. Women, children, old people were all being victim of tyranny.

The enmities that started over minor issues continued from generation to generation.  Scenes of carnage were common in the street and markets. Unjust killing of victims, mistreatment of women, burial of girls alive; what was the oppression that has not been perpetrated on the land of Arabia?

But when the spiritual sight of the Holy Prophet fell on their rusty hearts, the whole world saw the same savage people emerging as a civilized and developed nation. The Holy Prophet passed them through the stages of purgation of innerself and elevated them to the height of humanity. This edification became possible only due to the intense love of the Holy Prophet that their outward and inward, morals, lives, modesty, speech and even each single aspect reflected the essence of Holy Prophet. In short, the purpose of all the teachings of the Holy Prophet was edification and humanization and this is the basis of Mohammadan Faqr.

All the prophets wished to be a follower of Prophet Mohammad only because of Faqr. It is the real legacy of Holy Prophet and he feels pride on it. The Prophet said:

Meaning: Faqr is my pride and Faqr is from me.

It is a Hadith:

Meaning: A spiritual guide among his disciples is just like a Prophet among his nation.

It is another saying of the Holy Prophet:

It is not possible to describe the beneficence or divine attributes that Sultan-ul-Ashiqeen bestows upon his disciples. For the convenience of the seekers some of them are as follows:

Absolute faith on Murshid – the First Step of Edification

The process of edification starts only when a disciple has absolute and unwavering faith on his Murshid. It is because beneficence seeking and discipleship is a two-way process. Moreover, absolute faith on Murshid is a prerequisite to walk on the Divine path. When a seeker firmly believes that every action of his Murshid is for his betterment, then this thought becomes the guarantee of success in all the inner trials.

Edification According to the Nature of the Seeker:

Islam is a religion of nature. It means that all its teachings are in consonance with human nature. Human nature has a profound effect on personality. Sultan-ul-Ashiqeen spiritually trains a disciple according to his nature. Hence, he removes all the bad qualities from his innerself and makes him a better person. In conclusion, the other name of edification is purification of innerself.  Regarding the innerself, Sultan-ul-Ashiqeen says:

The greatest virtue of Sultan-ul-Ashiqeen over the Divine seekers is that for their spiritual edification, he does not entangle his disciples in hard Mystic exercises and daily rounds of recitals. Rather he enlightens the innerself of the seeker by the invocation and contemplation of Ism-e-Allah Zaat. By the efficacy of spiritual sight of Sultan-ul-Ashiqeen and theophanies of Ism-e-Allah Zaat the inciting innerself becomes weak. Gradually, inciting innerself (an-nafs al-ammarah) transforms into innerself at peace (an-nafs al-mutmainnah). Moreover, his nature also gets purified.

Role of Positive Thought in Edification:

Positive thinking is prerequisite for positive change of character. Every action of a man depends on his thinking. In the Holy Court of Allah Almighty, the Lord of the Universe, reward and punishment is also determined on the basis of man’s thinking, i.e. intention. Sultan-ul-Ashiqeen says:

Sultan-ul-Ashiqeen exhorts his disciples that the way to keep thinking positive is that one should do everything to please Allah, whether it is a worldly task or religious. Man cannot attain the pleasure of Allah by keeping himself aloof from the world because there is no room for monasticism in Islam. This is the real trial that one should seek Allah while living in the world. Hence, it is only possible if one does everything purely for Allah Almighty.

The heir of the Divine Trust is, in fact, a reviver and reformer of Islam of his era who, while maintaining the true spirit of the religion, renews the teachings of the religion in accordance with the modern requirements of his time. Sultan-ul-Ashiqeen is the reviver and reformer of Islam of third millennium. His style of preaching and edification is a clear proof of it.

In order to maintain the true spirit of Islam in this age of materialism, sedition and narcissism, Sultan-ul-Ashiqeen is spreading the teachings of Sultan Bahoo all over the world. For this, he has published many books and is using modern technology to promote them. Including e-books, Social Media such as Twitter, Facebook, WhatsApp, LinkedIn, Instagram, Pinterest, Tumblr, TikTok, Likee, etc. He also advises his disciples to keep pace with the world because Allah Himself says don’t call time bad, time is Allah Himself.

Sultan-ul-Ashiqeen is the founder and Patron In Chief of Tehreek Dawat-e-Faqr. The slogan of Tehreek is  فَفِرُّوْٓا ِالَی اللّٰہ (Run towards Allah). Moreover, this slogan becomes the purpose of life of all those who come with sincerity in his holy court.

Persistence is essential to success on the path of Faqr. Iqbal has described the personality of a Divine seeker in his poem in these words:

Meaning: A true believer is that when he is with his Muslim brothers and friends, his attitude towards them is as soft and gentle as silk. But in the battlefield, the believer becomes as hard as iron, and keeps on fighting until he bends the falsehood.

Sultan-ul-Ashiqeen modifies the personality of a true seeker as Iqbal described in these verses. Faqr is a path of Divine love. On this path, only that seeker succeeds, who does not care about anything other than Allah and walks on the path of Divine love with perseverance and steadfastness.

Ability of decision making is essential for the best development of human personality. In order to edify this skill to his disciples, he passes them through different outward and inward trials and assigns them different duties. Hence, bestows them the ability of decision making. Since a perfect Murshid is fully aware of the esoteric and exoteric condition of a seeker. Therefore, whatever duty he gives to the seeker, is based on his abilities. Moreover, it has also been observed that Sultan-ul-Ashiqeen edifes a Divine seeker in such a delicate manner that all the hidden virtues, about which he himself is not aware, all come to the fore. In addition, he puts a lot of emphasis on learning from past experiences.

Perfect Submission Surrender to Divine Will:

A perfect Murshid is the one who teaches his disciples the principles of servitude. Perfect servitude demands that the slave of Allah always remains thankful in front of Him and never argues or questions anything that happens to him. Moreover, surrendering and submitting oneself before Allah is the extreme level in Faqr. Only those seekers can attain Divine vision and the presence of Mohammadan Assembly who walk the path of submission to Allah’s will. The submission is that the seeker should submit to his Lord in sorrow, grief, happiness, contentment, richness, awe, fear, hunger, thirst, hardship, health and well-being, in every trial and calamity. Sultan-ul-Ashiqeen by the efficacy of his spiritual sight and training strengthens the quality of submission in the nature of true Divine seeker to such an extent that he remains content in all circumstances.

Sultan-ul-Ashiqeen says that when a person’s innerself is enlightened, then his outward automatically becomes obedient, submissive and worthy of being called human.  On the contrary, in the present age, instead of training the innerself, more attention is paid to the outward aspect.

Only a Murshid who is stationed at the highest spiritual station can bestow Divine attributes to his disciples. The same rule is applied in worldly life that whether purpose of a person is to get a degree or to reach a destination, he always seeks a guide who is perfect in his field. In order to be successful in esoteric path (Faqr), the guidance of perfect spiritual guide is mandatory. Only he can, with his esoteric and exoteric guidance help him to reach his destination. The perfect spiritual guide and Universal Divine Man of present age is Sultan Mohammad Najib-ur-Rehman. It is an open invitation to all those who wish to be elevated to the status of worthy of being called human, to start esoteric journey by swearing allegiance to Sultan-ul-Ashiqeen.

May Allah help us all reach our real destination.  (Amen)

‘Sultan-ul-Ashiqeen or Insan Saazi’ in the issue of August 2020. It was originally written by Mrs. Fatima Burhan Sarwari Qadri and translated in English by Faiza Fahad Sarwari Qadri. If you wish to read it in Urdu then please visit the link: