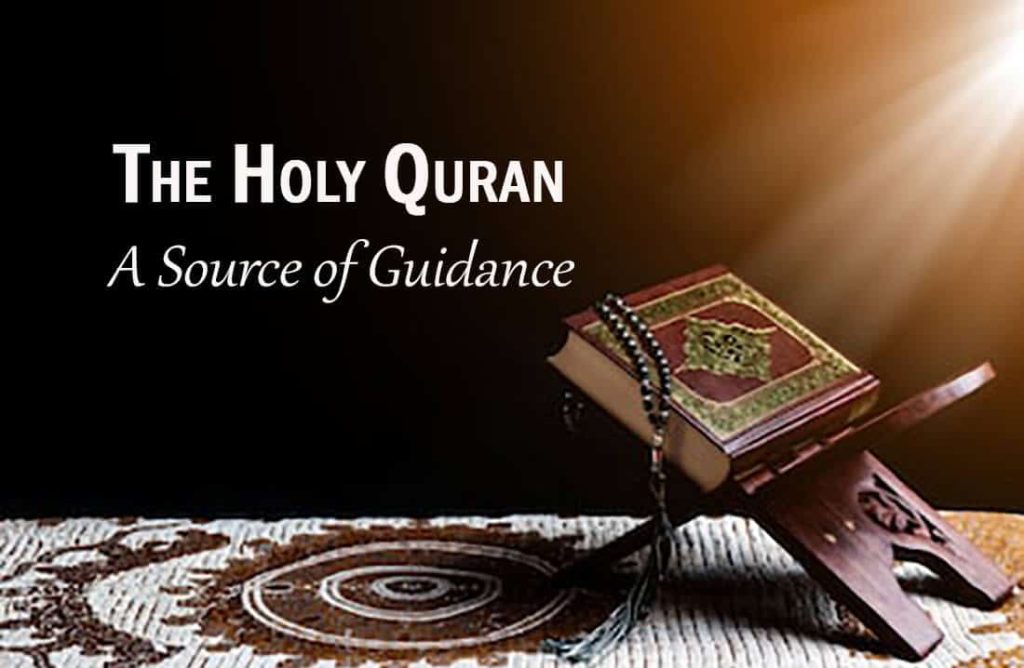 The Holy Quran – A Source of Divine Guidance

Allah Almighty Has Promised to Safeguard the Holy Quran

Meaning: And We are sending down in the Quran what is healing and mercy for the believers. And it only increases the wrongdoers in loss. (Al-Isra – 82)

Allah Almighty revealed the Quran upon the Holy Prophet. Just like Allah ardently loves the Holy Prophet so is His love with the Quran, such that He has promised to protect it Himself from any amendments. Allah says in Quran:

Meaning: Assuredly, We alone have revealed this Glorious Admonition (the Quran), and surely We alone will guard it. (Al-Hijr – 9)

It is worth noting that there must be something special about the Quran that Allah Himself took responsibility to safeguard it. This is the reason why the Quran is still in its original state as it was when first revealed upon the Holy Prophet many centuries ago.

It is sad to say that today, the Muslims either keep the Quran in their homes as a symbol of auspiciousness or merely recite it for requital. The irony is that if someone learns the translation and exegesis of the Quran, considers himself a scholar and starts presenting Islam in the light of his superficial knowledge. This is how various sects in Islam emerged, in which the so-called scholars declared fellow Muslims infidels. Such scholars are completely oblivious to the true teachings of the Quran. Their innerself (nafs) is infected with various esoteric ills and their inwards have become lifeless as a result. That’s why, instead of taking guidance from the Quran to correct their inwards and outwards, they waste their energies on criticising others.

The Quran only stays to their tongues let alone making any impact to their inwards. They have no idea of the eminence of the Holy Quran and why it was revealed.

The Quran guides towards the path of Allah Almighty. It has the depth and vastness of knowledge to provide guidance in resolving issues of every age. The revelation of Quran was completed over a period of 23 years. This is so that people could really digest the message of the Quran. Verses of the Quran were revealed at certain occasions to present solution to particular issues. The Holy Prophet provided explanation to complex issues that made it easy for the Companions to understand the true message of the Quran and gain guidance from it. The Quran has been a source of guidance since the Holy Prophet’s era and will continue to be so for the future generations.

Inward Peace through the Quran

Explanation: As the Muslims moved away from the teachings of Islam, they lost their dignity in the world. Today’s Muslims are like a pile of ash without any spark.

The Role of a Perfect Spiritual Guide

in Understating the Quran

Allah Almighty describes the Quran as light and guidance so that we use that to find the path to Allah and follow that to attain Divine vision and closeness which is the purpose for our creation. The Quran teaches us that in order to attain Divine vision and closeness, we need to follow the teachings of the Holy Prophet. For this, we have the life of the Companions as an example for us to follow. The Companions first attained purification of their innerselves, this allowed them to understand the true message of Islam.

The Holy Prophet and the Divine Universal Man

Need to Practice Islam from Heart

When we look around us, we find a lot of people who appear to be practicing Muslims. They pray five times a day, give zakat, may have performed Hajj and even many of them would know the Quran by heart. But are their innerselves purified and free of inwardly ills – i.e. backbiting, lying etc.?  We find many of them who look for others’ weaknesses, they brag over their prayers and worships. Allah says for such people that He has put a veil over their inwards such that they cannot understand the teachings of Islam.

It is said in Quran:

Meaning: Whoever will follow My guidance will neither lose the straight path (in the world), nor face misfortune (in the hereafter). And whoever turns away from My direction and guidance (i.e. remembrance and advice), his worldly sustenance will be narrowed, and We shall raise him blind on the day of Resurrection (as well). He will say: “O my Lord, why have You raised me up blind (Today) whereas I had vision (in the world)?” (Allah) will say: “In like manner, Our signs came to you (in the world) but you forgot them, and the same way you (too) will be forgotten Today.” (Taha 123-126)

It is clear from these verses of the Quran that, people who do not act upon the teachings of the Quran in this world will be raised up blind on the day of Resurrection.

Meaning: And that is how We recompense the one who exceeds the limit (in sins), and does not believe in the Revelations of his Lord, and surely the torment of the Last Day is extremely severe and everlasting. (Taha 127)

The Purpose of Our Life

We need to ask ourselves how we have spent our lives so far. If we look closely, we will find that in fact we have gone away from the teachings of the Quran and have started living our lives according to our worldly desires. Despite having all the amenities that make our lives comfortable, we still do not find inward peace. That’s because our inwards only find peace in the pleasure and closeness of Allah Almighty. Allah is closer to us than the distance between the membrane and adjoining layers of onion leaves but we do not recognise Him and don’t feel His closeness because of our own ignorance.

The purpose of our lives is to gain gnosis of Allah. The fact of the matter is that we can only recognise Allah once our innerselves have been cleansed and purified of all the inner grimes and ills. And that is only possible through company of a perfect spiritual guide.

Murshid (spiritual guide) means partner or ally. A spiritual guide knows the ups and downs on the path to Allah. The Holy Prophet said:

Meaning: Find an ally (spiritual guide) before embarking on a journey (to gain gnosis of Allah).

Explanation: A perfect spiritual guide is like a launderer who cleanses his disciples’ inwards through his gaze of all the inwardly grime and ills to enable their souls to gain Divine closeness and presence.

Allah draws man’s attention to Himself again and again throughout the Holy Quran.

Meaning: O man! You sustain rigours to reach your Lord. Ultimately you will meet Him. (Al Inshiqaq – 6)

Meaning: So run towards Allah. Surely, I am a clear Warner to you from Him. (Adh-Dhariyat – 50)

Meaning: Will you observe patience (and not strive towards gaining pleasure and gnosis of Allah)? And your Lord is All-Seeing. (al-Furqan – 20)

We should strive to learn and understand the true message of the Quran and seek refuge from such prayers and rituals that may make us arrogant instead of being a source of inward peace.

Explanation: Put your best efforts into achieving your goals. Never stop, keep challenging yourself on achieving more and more. Once you have achieved your initial goal, set yourself even higher goal and put even more effort in achieving that. There is no point in praying for the sake of praying, strive for the prostration that will change your inward.

Our beloved spiritual guide Sultan-ul-Ashiqeen Sultan Mohammed Najib-ur-Rehman is working hard through day and night to spread the tre teachings of the Quran throughout the world. A large number of disciples of Sultan-ul-Ashiqeen who have got their innerselves cleansed are now living their lives according to the teachings of the Quran which is the real success both in this world and hereafter. May Allah grant health and wellbeing to Sultan-ul-Ashiqeen and give us the strength and courage to remain his loyal disciples. It is compulsory to swear bayat in Islam to gain gnosis. We invite you to swear bayat on the hand of Sultan ul Ashiqeen.

This article is written by Nimra Sarwari Qadri and translated by Waheed Hassan.