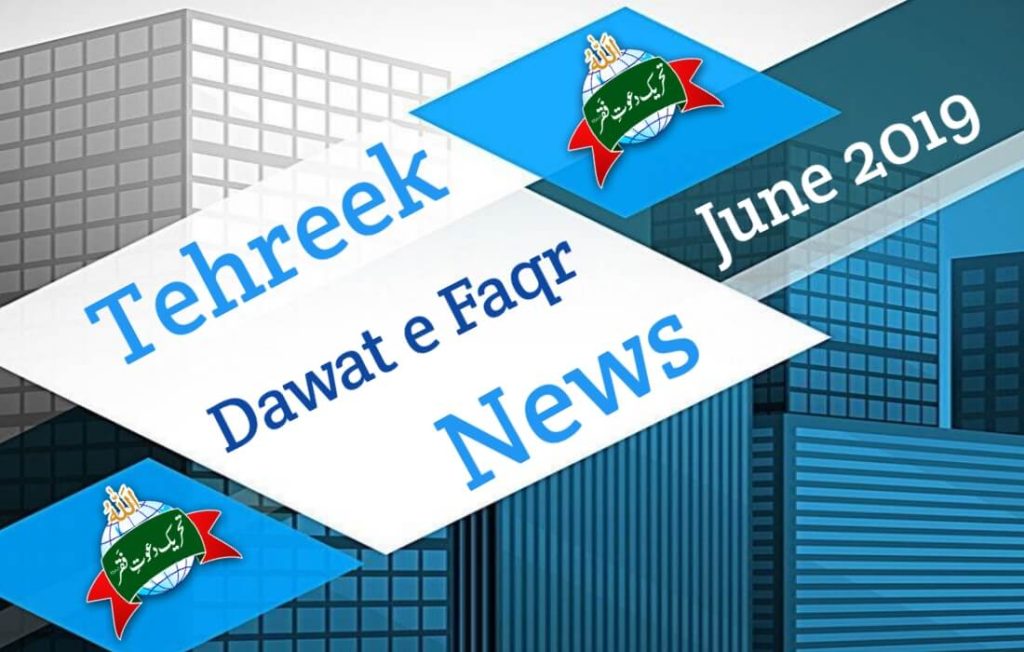 Gathering in memorial of Hazrat Ali

On 21st of May on the account of martyrdom of Ali Ibn Abi Talib, khanqah held a gathering under the supervision of Sultan-ul-Ashiqeen.

Nasir Majeed began the event by the recitation of the Holy Quran. Oly  HO

In respect of Hazrat Ali, Ata-ul-Wahab recited a beautiful encomium highly appreciated by the people present.

Mohammad Farooq Zia brought the program to an end by making prayer to Allah.

After this, Sultan-ul-Ashiqeen blessed those seekers of Allah with the opportunity to swear allegiance to him. He also provided them with Ism-e-Allah Zaat.

All the attendees got the chance to meet and greet Sultan-ul-Ashiqeen. He met them all individually and at the end made prayer for them all.

Meetings for welfare of Khanqah

Eid ul Fitr is a glorious gift to Muslims from Allah. The entire Muslim Ummah observes fast during this month so as to gain Allah’s pleasure. As a present for this good deed, Muslims celebrate Eid on the 1st of Shawwal.

Eid for the seekers of Allah is solely the glorious vision of their spiritual guide. So, keeping this in mind Tehreek Dawat-e-Faqr arranged a function to celebrate Eid. This function was held in the Sultan-ul-Ashiqeen House. In the management all members and departments showed love and keen interest towards their duties.

Sher Ali (joint secretary) and M. Ameer Hamza made the arrangements of food a day prior to the actual event.

Zahid Iqbal, Sadiq Ahmed, Ameer Hamza and Nazeer Ahmed acquainted Zulfiqar Raja in the preparations of food on the day of Eid. All brothers worked together in harmony to present delicious food to the attendees.

Details of the gathering:

The event took place in the khanqah after Maghrib prayer. The successors of Sultan-ul-Ashiqeen, Sahibzada Murtaza Najib and Dr. Hasnain Mehboob were present in the khanqah before his arrival. People from all over Pakistan travelled across the country to greet him on Eid and get to see him to make their Eid worthwhile. Each person seemed restless to just get a glimpse of Sultan-ul-Ashiqeen.

The time had finally come. Sultan-ul-Ashiqeen looking all glorious entered the khanqah with full charm. On his arrival, every person felt bliss at heart and started the zikr of Ya Hoo. To welcome him, Mohsin Raza Sultani recited an enchanting encomium melodiously, brightening up the vibe of this event. Sahibzada Murtaza Najib, Dr. Hasnain Mehboob, and Malik Naeem Abbas welcomed Sultan-ul-Ashiqeen presenting him a flower bouquet. The entire crowd began chanting to praise the great personality.

He greeted every individual one by one, hugged them and enlightened their hearts with love and faith. Even after the greeting ended, crowd continued with the beautiful chants.

Beginning of the event

The event officially began with the recitation of the holy Quran by Maulana Mohammad Aslam. This imbued a sense of serenity in the ambiance.

Meaning: May God not give me such a tongue that praises Him and does not praise His prophet.

Mohsin Raza Sultani recited an encomium to praise the Prophet. “With whom would I share the condition of my heart when you are there”

So beautifully he expressed the state of his heart through an encomium. The crowd enjoyed it all along. Then Ata ul Wahab presented an encomium for the Sultan ul Ashiqeen. It went like “having a look at your glorious face feels like Eid to me”. Right from the beginning of this encomium everyone started to sway with delight. They started chanting “Long live Sultan-ul-Ashiqeen”.

Atta ul Wahab read a heart touching verse in honor of Sultan ul Ashiqeen to which the entire crowd began chanting again to praise him.

Towards the end of the event, Sultan ul Ashiqeen thanked each person to have joined. He prayed for them that may Allah bless them with Divine Love and rid them of their inner self diseases.

He shared a memorable incident:

“This year we visited south Punjab and Sindh. So, in a gathering at Dr. Shakeel’s residence a small boy kept coming to me again and again. I asked him what does he want to become when he grows up. Whether he desires for a high status in this world. To which the kid replied, “No.” then I asked so what do you want? He said I want to become a lover. Then Sultan ul Ashiqeen prayed that may Allah make him a lover. Moreover, he prayed for everyone so Allah makes them all His lovers.

After greeting them all he departed to Sultan ul Ashiqeen House where a gathering for females had been organized. After he left, they made arrangements for food. Everyone enjoyed having the food and appreciated the management. After this all the attendees thanked and bid farewell to the management.

Sultan ul Ashiqeen advised them to work with full potential and motivated them. Also, he gave them ideas as to how they could better their work. And also, he guided the food department with their development.

Tehreek Dawat-e-Faqr News from all over Pakistan

On 23rd of May, 2019, Sultan-ul-Faqr Publications stall was set in Jamia Mosque Gulzar-e-Madina in Muslim Colony. As usual, people not only liked the book but bought them a lot. They were told that path of Faqr is in fact a journey of self realization.

On 23rd May, 2019, Sultan ul Faqr Publications set up a stall in Jamia Mosque Kala Gujran. People loved the books and bought them in large amount.

On 17th of May, Friday, 2019, a book stall was set up in Sardaran Mosque. Other than these stalls, books by Sultan ul Faqr publications are available at different stores in different areas.

All these activities only amount to inviting people towards the path of righteousness.