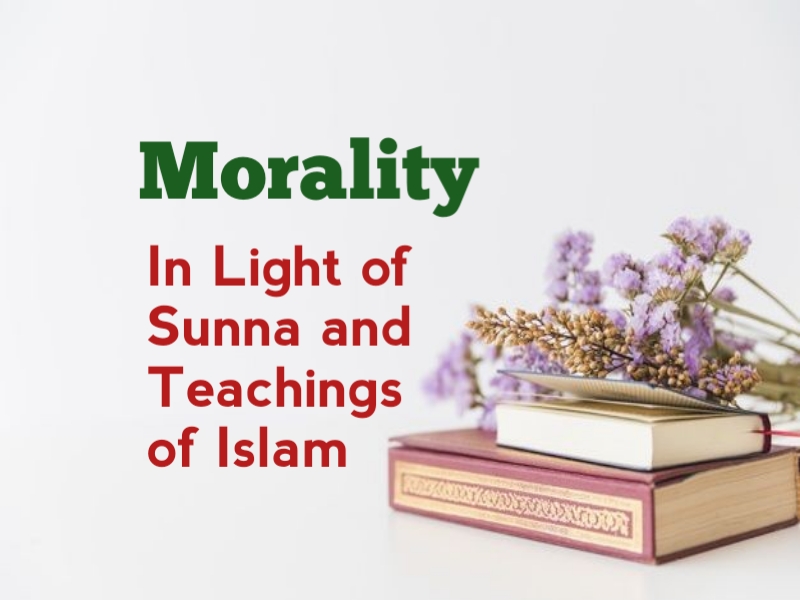 A person is known by his or her character and conduct (morality). A person’s character is those habits which become their second nature. According to Shah Wali Ullah Mohadith Dehlvi, they are of two types:
Good habits or morality is that a person, for the sake of Allah doesn’t let his or her character to degrade. In fact, real beauty is one’s moral conduct. One can overcome lack of natural beauty with good character. But, on the other hand one cannot make up for lack of morality with physical beauty.
Ali ibn Abi Talib says:

There is win and loss in every field of life. But there is no loss in morality and never a win for pride and vanity.

Some people put a lot of emphasis on outward devotions but pay no heed to enhancing their moral conduct. When in reality, morality is the soul of faith (Islam).

The Holy Prophet (pbuh) was at the highest level of faith – and faith is based upon morality and good deeds.

A person is known by his character and faith, not by what he or she wears. Good moral conduct is a blessing of Allah Almighty. As the Holy Prophet (pbuh) said:

Allah is great and His attributes include generosity, kindness and forgiveness. Morality and good conduct is like fragrance that can be felt from miles away. Therefore, one should strive to make their character like a flower. So that people who come in their company may obtain the fragrance of righteousness. Morality has many aspects, and therefore a true believer keeps morality at the forefront of everything.

Our way of vocal conduct reflects our morality. Careless and reckless conversation can sever relations. Therefore, one needs to be very careful. Allah says in Quran: And tell My servants that they should say things that are most balanced. Surely, Satan causes contention amongst people. Indeed, Satan is man’s declared enemy. (17: 53) In the aforementioned verse, Allah commands his servants to say good things. People who say things without thinking, break other people’s hearts. Believers avoid saying absurd things. As Allah says in Quran: And who (always) keep away from absurd talk. (23: 3) Ali ibn Abi Talib (ra) says:

Morality is like a shop whose lock is tongue. When the lock opens it reveals whether the shop is full of gold or iron.

Some people are sweet talkers but keep jealousy in their heart. This is hypocrisy. One should be same outwardly as well as inwardly. Allah created everyone, therefore, no one is ugly. The differentiator is a person’s moral conduct. People who are double faced i.e. say something on face and do different on people’s back – for such people Shaikh Fazeel bin Ayyaz says:

“O my son! If possible, live such a life that you have no malice against anyone in your heart.” Then he said, “And this is my Sunna. Whosoever adopted my Sunna will be with me in Jannah.” (Bukhari and Muslim)

Those who have jealousy and malice in their hearts see everyone other than themselves inferior. They lose the ability to ponder and contemplate. Like the eye sees everything around it but if something gets into it, it cannot see it. Similarly, a person sees others’ weaknesses but doesn’t see his own weaknesses. What is it that can buy everything but can be acquired without paying anything? That thing is morality and good conduct. Allah says in Quran: And say to the people what is good. (2: 83)
Good moral conduct fosters good relations whereas ill manners break others’ hearts. One can make up for anything other than breaking someone’s heart. Making a Muslim happy is better than every prayer or devotion. The Holy Prophet (pbuh) said:

“Worst of mankind is that person whom people avoid because of his harsh attitude and absurd talk.” Once, Companion of Holy Prophet Fazl (ra) told him about a woman who used to perform excessive devotions by praying day and night and used to fast during the day. But her moral conduct was very poor. She used to hurt her neighbours through her attitude. Upon hearing this, the Holy prophet (pbuh) said: None of her good deeds are accepted. She will enter hell. (Bahiqqi)

It is better to correct one’s conduct than to hurt others. Wasif Ali Wasif says:

“Spend so much time on correcting yourself that you don’t get time to criticise others.”

Forgiving is part of good character. It is one of Allah’s attributes. Allah loves those who forgive. Abdullah ibn Umar relates that the Holy Prophet once said:

Shaikh Abdul Qadir Jilani quoted his conversation with Allah in Risala tul Ghausia in which Allah said to him:

“O Ghaus al-Azam if you treat the creation with kindness and forgive them then there will be tooba (goodness and happiness) for you.”

There is no doubt in the extremely exalted spiritual status that Shaikh Abdul Qadir Jilani has in spirituality. If, despite that Allah gives him glad tidings linked to being kind and forgiving to mankind then it is a point worth pondering for us that how much Allah loves his creation. No matter how much devotions one performs but if they hurt Allah’s creation then they cannot attain the closeness and pleasure of Allah. Here, the word creation is mentioned which indicates it doesn’t matter what sect or religion one belongs to or whether it is a human or some other creation. Another attribute of Allah’s pious men is that if someone hurts them, they do not seek revenge. Instead they forgive them.

Forgiveness in the light of Hadith

“A believer who lives amongst others and tolerates their ill behaviours is better than those who do not keep contact with others.” The Holy Prophet (pbuh) further said: “No one amongst you can be like Abu Zamzam. The companions enquired, what (good deed) does he do? Upon this, the Holy Prophet (pbuh) said, “Every morning he prays in the court of Allah. O Allah, May I sacrifice my life upon those who hurt me.  I’ll will not seek revenge for any oppression.” Therefore, we should strive to adopt good character.

The Moral Character of the Holy Prophet

Allah has expressed the grandeur of His beloved in Quran in detail. At times, He admires beauty of His beloved whereas on other occasions He praises the unique and beautiful character of the Holy Prophet. When mentioning the moral conduct and habits of the Holy Prophet, Allah expressed in Quran as below: And assuredly, you are placed high on the most glorious and exalted (seat of) character (i.e., adorned with the Qur’anic morality and endowed with the character traits of Allah). (68: 4) The Holy Prophet (pbuh) had a very kind nature. He loved everyone. His teachings are full of mutual love and respect. He prohibited every such act that severs relations. Indeed, the Holy Prophet’s exemplary character is what differentiates him from the rest of the creation. The Holy Prophet was of extremely reserved nature. He never said any harsh words to anyone. He always had a smile on his sacred face but rarely laughed loudly. The Holy Prophet (pbuh) himself said:

“I am here to complete morality.”

One of the many attributes of the Holy Prophet was contentment which used to be prominent at every occasion. When he used to receive something in the form of bounty or edibles. Until and unless he distributed them amongst the needy, he didn’t return home. There are many such incidents. The Holy Prophet (pbuh) often used to say the following prayer before devotions and rituals.

“O Allah! I ask for morality and righteousness. Indeed, only You can bless. I ask you to keep me away from ill habits as only You can make it happen.” (Nisai 2:129)

On the path of Faqr, morality has a lot of emphasis and importance. One needs company and guidance of a Perfect Spiritual Guide to develop good character. In today’s age such Divine personality is Sultan ul Ashiqeen Sultan Mohammad Najib ur Rehman. He is stationed at the highest level of morality. His moral conduct is a reflection of that of the Holy Prophet (pbuh). Which is a testament to the fact that spiritually he is on the footsteps of the Holy Prophet (pbuh). Some of his key attributes include patience, kindness, humility, steadfastness and bravery to name a few. It is open invitation to all to adopt the company of the Universal Divine Man of present era so that they may get their innerselves purged and ornate them with morality and righteousness. May Allah bless us all to follow the Sunna of the Holy Prophet (pbuh). Ameen

Note: This is an English translation of Urdu blog حسنِ اخلاق which appeared in the September issue of Monthly Sultan ul Faqr Magazine. Faqiha Sabir Sarwari Qadri wrote the original article. Waheed Hassan Sarwari Qadri has translated it in English.

What does the Quran say about morality?

There is a lot emphasis on morality and righteousness in Quran. The Sunna of Holy Prophet (pbuh) is a living example of exalted character and morality. Whilst mentioning the morality of Prophet Mohammad, Allah says in Quran: And assuredly, you are placed high on the Most Glorious and Exalted (seat of) character (i.e., adorned with the Qur’anic morality and endowed with the character traits of Allah). (68: 4)

What are the basic principles of Islamic morality?

The teachings of Prophet Mohammad lay a lot of emphasis on adopting good character and morality. He himself was of very kind nature, avoided absurd talk and always used to forgive people who hurt him. He inculcated the same to his Umma.d habits or morality is that a person, for the sake of Allah doesn’t leter to degrade. In fact, real beauty is one’s moral conduct. One can overcome lack of natural beauty with good character. But, on the other hand one cannot make up for lack of morality.
Click to rate this post!
[Total: 0 Average: 0]
Post Views: 3,648