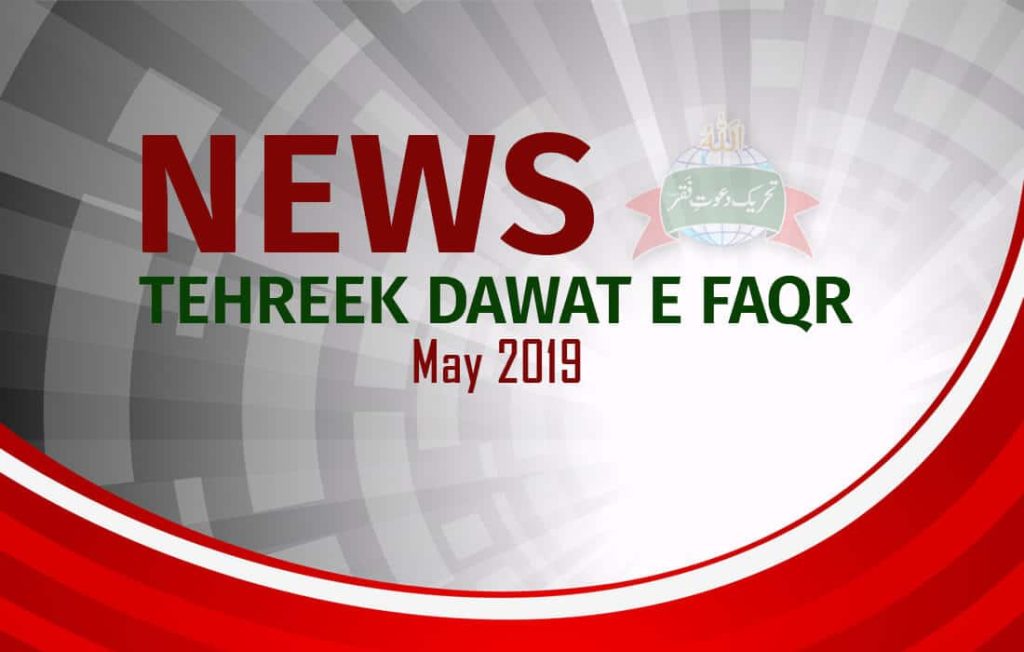 On Sunday 5th May, a joint meeting of the Tehreek’s Executive Committee and General Council was held at the central office located at 4-5/A Extension, Education Town, Wahdat Road, Lahore. Members from both the committees attended the meeting. Naeem Abbas, the Chief Executive of Tehreek Dawat-e-Faqr presided over the meeting. General secretary Abdul Haseeb briefed the audience about the meeting agenda and key topics of interest.

The training courses delivered by various departments of the Tehreek during the holy month of Ramadan came under discussion.

Various other topics were also discussed during this joint session. The management team encouraged the attendees to donate their zakat, sadaqa, ushr etc. to Tehreek Dawat-e-Faqr. The team briefed the attendees about the ongoing projects that require a large amount of money for completion. The attendees appreciated the ongoing activities and promised to continue their financial support.

The Khanqah was decorated beautifully in preparation for the holy month of Ramadan. This included preparations to hold Tarawih and teaching sessions during the holy month. Head of preaching department, Arshad Ramzan and his deputy Mohammad Aslam headed a campaign to invite disciples from across the country to come to the central office of the Tehreek to get training on various subjects.

Special arrangements are made for Suhur and Iftar in the Khanqah during the holy month of Ramadan. Mohammad Aslam leads the five daily prayers as well as Tarawih.

Arshad Ramzan and Mohammad Aslam deliver a daily lecture on various topics of Faqr. These lectures reinvigorate the audience’s faith and induce a renewed desire in them to gain closeness and gnosis of Allah. The residents from the vicinity also attend these lectures in addition to the devotees who are permanently resident in the Khanqah. The Tehreek invites everyone to come and join the various activities in the Khanqah.

The Tehreek News From Across Pakistan

On 21st April, the Tehreek’s regional office in Broat, Srai Alamgir ran a preaching campaign to invite the people towards Faqr. The local team informed the people about the gnosis of Allah. They distributed a number of complementary copies of the Monthly Sultan-ul-Faqr Magazine in the area. In addition, they placed many books published by Sultan-ul-Faqr Publications in local shops for people to take away.

On Friday 3rd May, Tehreek Dawat-e-Faqr Haroonabad organised a book stall which was highly praised by the attendees. Another such stall was organised on Friday 10th May in the Jamia Mosque Gulzar-e-Madina.

On Wednesday 8th May, General Secretary of the Tehreek’s regional office Ghabba Fazil, Mohammad Afzal held a teaching session of Abyat-e-Bahoo. A large number of people from the area attended the session. The attendees highly praised the effort.

On Friday 10th May, the regional office of Tehreek Dawat-e-Faqr in Jhelum organised a book stall showcasing Sultan-ul-Faqr Publications’ books at the Jamia Mosque Kala Gujran. A large number of people from the area participated. They highly appreciated the quality of books and bought many books.

Stay in touch with the activities of Tehreek Dawat-e-Faqr. We bring you the NEWS of Tehreek in both English and Urdu languages. English NEWS have been penned by Waheed Hassan. For Urdu News click the link: