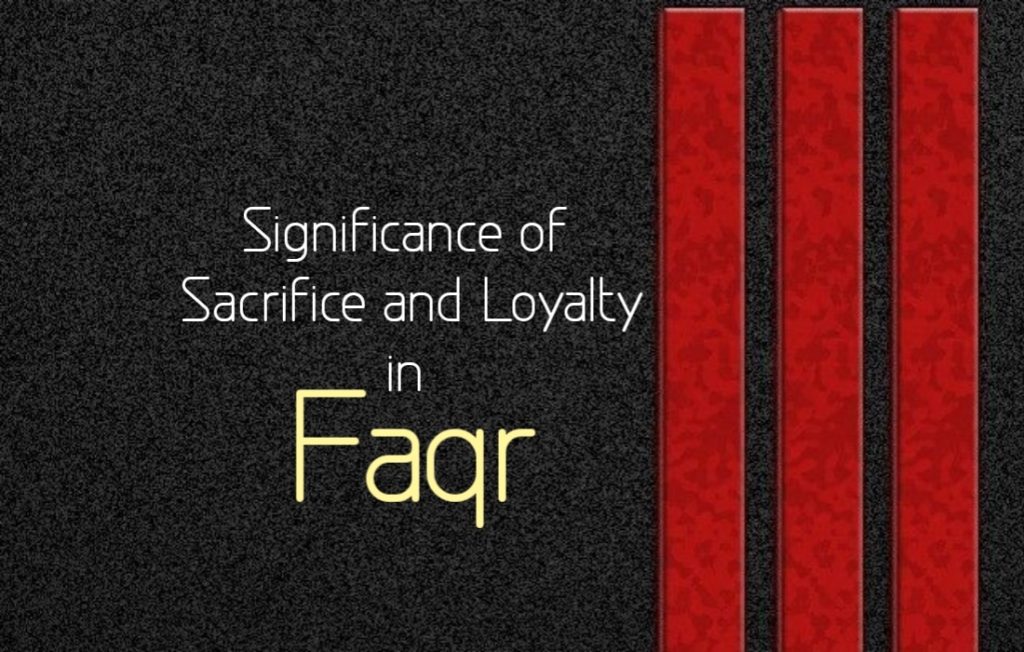 Significance of Sacrifice and Loyalty in Faqr

The path of Faqr is in fact the way of Divine love. Success in this arena of Faqr is unachievable unless a seeker dedicates all that is dear to him in the way of Allah. Allah says:

LOYALTY AND SACRIFICE IN FAQR:

In Faqr, the greatest Sunna is to sacrifice all belongings in the way of Allah. Allah says to Prophet Mohammad:

Some Companions responded positively to the Prophet’s announcement of his Prophethood and his call towards Allah. They accepted Islam and believed in Allah’s Messenger by reciting shahada through their inward verification. Also, they faced tremendous difficulties and hardships. Further, the believers (Momins) who belonged to poor families or the class of slaves faced torture right from the beginning. One trembles at the very thought of the physical, spiritual and economical pain inflicted upon them. However, one salutes to the impeccable level of loyalty and sacrifice of the sacred Companions. Their endurance of pain and torture did not drive them away from the way of Allah nor made them short of their loyalty to the Holy Prophet.

LOYALTY OF BELIEVERS FOR DIVINE LOVE:

Moreover, temptations surrounded the believers with a social repute to renounce the way of Allah-Faqr. Despite the variety of worldly luxuries offered to them, they turned down every offer. However, they faced terror through different methods. Consequently, Prophet Mohammad and his sacred Companions faced social and economic boycott. For three years, Prophet Mohammad and his group of believers stayed in the valley of Abi Talib to face the social boycott of the Makkans. However, their perseverance is remarkable that they did not leave their faith despite all the difficulties and the torture of the people of Makkah that they had to suffer. Below is a picture of their miserable condition:

DIVINE LOVE AND LOVE FOR PROPHET:

All these troubles and difficulties were unable to bring any change in the faith of the sacred Companions and their loyalty to Prophet Mohammad. On the contrary, their loyalty and faith only strengthened because in every aspect of Islam that required sacrifice, the Companions were always on the forefront.

Meanwhile, Prophet Mohammad educated his Companions in such a way that he removed all other affinities from their inwards except the love for Allah and His Messenger. Whatever became a hurdle in their love for Allah, they sacrificed it in the way of Allah owing to their utter indifference towards everything other than Allah. Hence, this is the true spirit of Faqr.

ULTIMATE EXAMPLE OF KARBALA IN FAQR:

The second most significant example of loyalty and sacrifice is the incident of Karbala due by the martyrdom of Husayn ibn Ali and his companions:

‘Loyalty and sacrifice’ are the essentials of Divine love and Faqr. Hence, love demands that loyalty remains unchanged and when the time of sacrifice draws near, one faces it willingly. If one understands this, then he has truly deciphered the meaning of Faqr.

DIVINE LOVE IS THE KEY TO FAQR:

Further, all the Companions of Husayn ibn Ali were the followers of the path of Divine love. Hence, they offered to fulfil their duty of loyalty and to ‘sacrifice’ their life when asked. They did exactly what is required in Divine love and Faqr. What amazing lovers Husayn ibn Ali had! Such lovers are hard to find for a spiritual guide. Furthermore, their grandeur is unique and their height of loyalty and sacrifice is incomparable. In this game of Divine love, the intellect failed. Even after losing all, Divine love won. Faqr got victory over everything else.

Moreover, it is a fact that Divine love conquered even after martyrdom, imprisonment and losing each other. Intelligence seemed to be victorious but according to the rule of Divine love, its victory hides in the apparent victory of intelligence. The blind hearted and oblivious to the vision of Divine light were unable to understand it. Only the people of Faqr understood it. Furthermore, the conquest of Divine love was a result of loyalty and sacrifice. Faqr flourished in the field of Karbala. In fact, the incident of Karbala is the perfect and eternal narration of ‘Divine love’. Faqr prevailed over Yazidism. The loyalty and sacrifice of the people of Karbala made Karbala the synonym for Divine love.

ALLAH’S WORDS ON SACRIFICE AND LOYALLTY FOR SUCCESS IN FAQR AND DIVNE LOVE:

When you will make Allah your sole friend inwardly and outwardly, then He will love you as He says:

Sultan Bahoo says, “The person who gains the extremity of the gnosis of Faqr (union with Allah) becomes the living proof of the following verse by sacrificing his every belonging in the way of Allah-Faqr:

QUATRAIN 1-INTELLECT HAS NOTHING TO DO WITH FAQR:

Explanation: The lovers are drunk with intoxication by the pleasure of their Divine love for the Beloved. The seekers who have happily placed their lives in the hands of their beloved (perfect spiritual guide) during their lifetime, have become eternally alive. Those with enlightened inwards of Divine love through Ism-e-Allah Zaat do not feel the need to get involved in any other form of worship. Intellect has nothing to do in the way of Faqr! Faqr is beyond all this. Hence, the realm of Oneness lies beyond the intellect and is achievable only after annihilating intellect itself.

Explanation: Had the lovers (of Allah) implemented the advices of people upon their lives, they would never have sacrificed their entire household in the way of Allah nor would they have enlightened their inwards with the flame of Divine love. Ever since they have tasted the addictive pleasure of the vision of the Beloved, they have lost their senses. Moreover, I sacrifice my life for those beheaded in Divine love and did not demand anything in compensation from their Beloved.

Explanation: Faqr can only be earned by sacrificing wealth and life. This is why one should give up everything to get Faqr. Since Faqr grants the greatest blessing of Oneness with Allah, one should not even grieve after giving up one’s wealth and life. However, many pseudo spiritual guides misguide their disciples and make them useless for this world and the hereafter. Only the followers of the Qadri way have the courage to renounce this world for Allah and Faqr because Shaikh Abdul Qadir Jilani is the king of the kingdom of Faqr.

Explanation: The ocean of Divine Oneness is flowing since forever. Only you are misfortunate that you could not gain beneficence from it. Recitals and prayers in mosques do not purify the inward and you shall remain veiled despite worship. For the gnosis of Allah, you must bow your head in front of the perfect spiritual guide. Faqr means giving up on everything in front of the Beloved. Hence, many dignified men have sacrificed their status and excellence in the game of Divine love and Faqr. Union with Allah unachievable unless one sacrifices one’s household for the sake of Allah and Faqr.

QUATRAIN 5-DIVINE LOVE IS THE CORE:

Explanation: Since, on the day of Divine covenant, the souls answered, ‘Yes’ ( قَا لُوْا بَلٰی ) to the Divine address (of, ‘Am I not your Lord?’), it is obligatory to remain steadfast upon it. That is why I am fulfilling my promise which I made in pre-existence by drowning in the ocean of Divine Oneness. People get surprised and worried after watching me like this. I have made Divine love my core and absorbed myself in it to swim in this ocean of Oneness. I have complete faith upon Divine love that it would take me to the ultimate depth of the ocean. Further, nobody achieves union with Allah in this life and one who does, only achieves it after giving up everything and annihilating himself. Furthermore, only then, Faqr reaches success.

QUATRAIN 6-FAQR IS NOT TRADE:

Explanation: O imperfect seeker! You have happily exchanged the Divine love with the world and paradise. Whose advice did you follow for this trade that has brought nothing but loss. How much life do you have? This worldly life ends soon and you will feel the suffocation of prison of grave. You would not be able to turn your side as it would be extremely narrow. This means you lost both your religion and the world. Hence, the Divine Master would take such accountability from you to answer for every single moment and incident of your life.

Explanation: The worldly people tremble in pain and complain upon a single grief or worry but the lovers conceal and treasure a million pains within their inwards without writing a word. The ship of Divine love is such that it is already at risk to sink on its way. So, people refrain from getting on board. The Divine lovers are fearless towards all dangers of Faqr and get into this ship happily. Further, every bit of Divine love is more valuable for them than all the jewels and gems in Divine court. It is the lovers sacrifice everything to get such the valuable treasure of Faqr.

Conclusively, the closeness of Allah is unachievable unless one sacrifices his household and everything in the way of Allah-Faqr and does not retreat in his loyalty and sincerity towards his perfect spiritual guide in times of difficulty. In Faqr, one humbly sacrifices everything and stays loyal to his spiritual guide.

This article was originally published in the April issue of Mahnama Sultan-ul-Faqr Lahore (the monthly Urdu magazine of Tehreek Dawat-e-Faqr). The article was titled as ‘Wafa aur Qurbani’. Originally written by Sultan-ul-Ashiqeen Hazrat Sakhi Sultan Mohammad Najib-ur-Rehman, it has now been translated into English by Neyn Tara Sarwari Qadri. If you wish to read the original article, please visit:

We invite you to join Tehreek Dawat e Faqr.