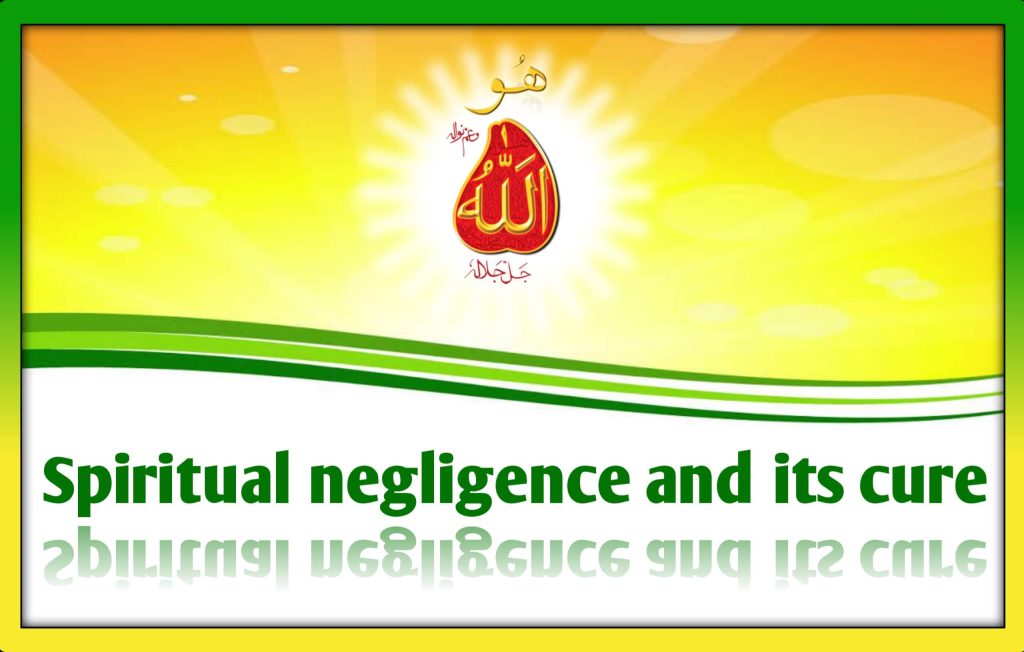 SPIRITUAL NEGLIGENCE AND ITS CURE

Lexically, negligence means carelessness, irresponsibility and dereliction of duty. According to scholars it is laxity in the laws of religion but in the path of Reality spiritual negligence is to forget the purpose of life which is a great loss. As man could not reach the hidden Trust in his inward and wastes life. The present Imam and spiritual guide of Sarwari Qadri order says about spiritual negligence:

A spiritual negligent is the one who is playing at the hands of innerself (an-nafs), world and Satan. Also Quran states:

Spiritual negligence is a veil

Spiritual negligence is a veil which wraps itself around a person in such a way that it stops the wish for Divine proximity and gnosis. It even hampers a person’s personality development and causes other spiritual illnesses such as greed, materialism, obeying every whim of innerself, jealousy and other diseases.

Spiritual negligence makes the soil of inward and soul barren such that the Divine light is subdued in the being of a person and he completely gets trapped by it. Consequently such a person has a disastrous end just because of spiritual negligence. Quran states:

Negligence both in the matters of the world as well as spiritual negligence, completely ruins a person. Importantly, an example would be of a student who is negligent towards academics which would ultimately make him a failure in the world.

Spiritual negligence in religious matters is as if a person performs all the devotions but instead of focusing on pure intentions he does all for the mere selfish purposes like showing off then the devotions which could have led to Allah become just a pretence. Moreover, Allah does not like spiritually negligent people. Also Quran states:

Prophet Mohammad (pbuh) said: There are seventy thousand veils of light and darkness between you and the Truth.”

The veils of darkness are of ignorance and spiritual negligence whereas of light are the stations in the journey to Truth which a seeker has to cross. Now to stop at any station permanently would be considered negligence towards annihilation in Allah and immortality with Him.

In dominance of lust a person becomes forgetful of hereafter. (Kimiya-e-Sa’adat)

Physical endeavours mean that a person is imposed with so many worldly tasks that it becomes impossible for him to think outside of them. Therefore love for world is such a disease which not only brings disaster in hereafter but in world as well.

As a Muslim, we all have belief in the fact that one day our souls will return before the Lord where He will question us all regarding our intentions and deeds. Now the question arises how to prepare for this exam?

If one ponders then he will soon realize that the moment soul leaves the body all desires and materialistic wishes comes to an end and one will be accountable in the hereafter. Importantly, all the signs are before us but instead of comprehending them man becomes negligent.

One of its main reasons is negligence towards invocation of Allah. Quran states:

The Holy Prophet (pbuh) said: Satan has occupied man’s inward but when a person remembers or invokes his Lord then Satan runs away.

Do not be neglectful of invocation

The inward which remains ignorant of Allah’s invocation becomes a dark place where there is no light and is the abode of Satan. Therefore, the devil attacks with such venomous strikes that such a person becomes subservient to innerself (nafs) and we can conclude that one of the reasons of negligence is rushing after materialistic desires. Which becomes more and more attractive as the person desires them more. At the end, man becomes trapped in the dark hole of desires and they never end no matter how much he achieves them. This causes thickest veils of innerself in the inward of man.

Quran states regarding those who are neglectful of invocation:

Explanation: The breath which leaves without the invocation of Allah is utter negligence. This is the foremost lesson taught by my spiritual guide. (Abyat-e-Bahoo Kamil)

Which invocation enlightens a person?

Now the question arises which is invocation blesses Divine vision and totally enlightens a person.

Sultan ul Ashiqeen says in this regard:

The contemplation of Ism-e-Allah Zaat and invocation of Allah takes one away from negligence. It enlightens one with light, proximity, vision and gnosis.

Explanation: One who is attached with Ism-e-Allah Zaat (Invocation of Allah), gets detached from everything other than Allah. (Ain-ul-Faqr)

The present spiritual guide and leader of Sarwari Qadri order, Sultan ul Ashiqeen is spreading the beneficence of invocation of Allah among people. People who have pledged allegiance to him have felt Divine proximity and gnosis. There are innumerable accounts.

Open invitation to everyone who wishes to pledge allegiance to Sultan ul Ashiqeen and obtain Invocation of Allah which without a doubt removes spiritual diseases and enlightens heart with Divinity.

Explanation: Do not become negligent and seek your place in the court of Allah.

This is English translation of an Urdu article from the magazine “Mahnama Sultan-ul-Faqr Lahore” for the month of October 2020. Originally penned by Anila Yasin Sarwari Qadri is presently translated in English by Sultan Mohammad Abdullah Iqbal Sarwari Qadri exclusively for the website. Do not forget to visit the original article to which you only have to click the link https://www.mahnama-sultan-ul-faqr-lahore.com/october-2020-ghaflat/