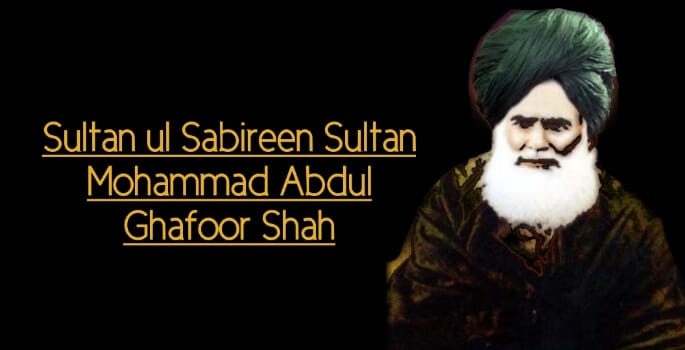 Sultan ul Sabireen was only twenty-five years old when Prophet Mohammad and al-Ghawth al-Azam came into his dream. They gave him the good news that Allah has chosen him for the trust of Faqr. Therefore, he must go to the sacred court of Syed Mohammad Abdullah Shah in Ahmadpur. On this Sultan ul Sabireen immediately left for Ahmadpur to attain the trust of Faqr. He then took the oath of allegiance at the hands of Syed Mohammad Abdullah Shah in 1891.

Love for his Murshid

Eulogy Written by Sultan ul Sabireen in Honor of his Murshid

Explanation: The spiritual beneficence of Syed Mohammad Abdullah Shah is just like a flowing spring of an-Nur which is benefitting everything on its way. Ahmadpur, where Shah Abdullah lives, is a blessed city which is showered with the torrents of the an-Nur of Allah. Shah Abdullah has reached the honorable status of Oneness with Allah after crossing the stations of Fana Fillah (annihilation in Allah) and Baqa Billah (being immortal with Allah. Thus, he has acquired the Divine knowledge of totality. He knows whatever Allah has written in the Guarded Tablet with the Divine pen and the Divine ink. Due to Shah Abdullah’s presence, the district of Bahawalpur has become the center of Divine Benevolence.

Murshid is an-Nur of Allah per Sultan ul Sabireen

The Holy being of Shah Abdullah has annihilated in the an-Nur of the Divine Self, so he has become the manifestation of Allah and possesses the An-Nur and beauty of Prophet Mohammad. The An-Nur which manifests from Shah Abdullah, attracts and mesmerizes everyone. It seems as if Shah Abdullah has cast a magic spell on everyone. That is why he is known as a magician.

However, the seekers and knowers of Allah gain the gnosis by observing that an-Nur in his sacred self. Sultan ul Sabireen further says that his Murshid grants his seekers the Divine knowledge as he is the perfect knower of Allah. They are pleasantly surprised to see all the signs and morals of their beloved Prophet in his holy self and thank Allah for making this peculiar arrangement for the seekers of Allah and lovers of His Prophet, to meet and see them and get their beneficence through Syed Abdullah Shah.

Transference of Trust of Faqr to Sultan ul Sabireen

On Friday, 29th Ramadan 1276 H (April 20th, 1860 AD), Sultan ul Tarikeen Syed Abdullah Shah, the role model of morality, the Murshid of Sultan ul Sabireen passed away. Before Syed Abdullah Shah passed away, he had already transferred the trust of Faqr to Sultan ul Sabireen at the shrine of Sultan ul Faqr Sultan Bahoo. Almost a year after the death of his Murshid, Sultan Mohammad Abdul Ghafoor went to Shorkot. Here, he stayed for more or less a year. During this time Pir Syed Bahadur Ali Shah took oath of allegiance on his hands.

In 1862, Sultan ul Sabireen migrated to Mud Rajbana, Garh Maharaja district Jhang and stayed there till his death. During this time thousands of seekers got the beneficence of Ism-e-Allah Zaat from him.

Arif is the one who worships Allah after having Divine vision and recognition. Pir Bahadur Shah must have gained such extravagant gnosis of Allah that al-Ghawth al-Azam awarded him the title of Shahbaz-e-Arifaan, which means, ‘the falcon of Arifs’.

Pir Mohammad Bahadur Shah wrote eulogies in the honor of his Murshid, Sultan ul Sabireen Pir Mohammad Ghafoor Shah. The main theme of his poetry is Divine love, ishq for Prophet Mohammad and his Murshid. His poetry is not based on imagination rather it is the expression of the Divine realities and is nothing but truth. He beautifully expresses the love for his Murshid in his poetry. Few abyat from his poetry are as follows:

In this stanza Pir Mohammad Bahadur Shah is emphasizing on the importance of following Murshid to attain gnosis of Allah. He has engrossed in the vision and love of his Murshid, Sultan ul Sabireen. Hence explaining his grandeur, he says that an ignorant has no knowledge about Allah because he is away from the perfect Murshid. As without Murshid, it is impossible to find Allah. This is verified from the saying of the Holy Prophet, meaning: “First find a companion (Murshid) then set on the journey (to Allah).”

Since the ignorants are without a companion that is why they have gone astray in this dark jungle of the world. According to a Hadith, “(The outward) knowledge is the greatest veil”, their outward knowledge has become a veil between them and Allah. As due to it they think that they are complete and do not need anyone’s help and guidance to reach Allah. Outward knowledge is a veil also because it makes them proud over their knowledge. Undoubtedly, pride is the most undesirable attribute in the court of Allah. Being away from Allah and Murshid, they are easily trapped by their an-Nafs and its lusts. However, those who have found the perfect Murshid, have reached Allah, got one with him and became the whole from a mere part.

Mere Knowledge Does not Grant Gnosis of Allah

Those who think that merely reading books, they can attain gnosis of Allah, remain trapped in books and are not able to experience the gnosis of Allah practically. Like Prophet Mohammad said:

Meaning: Knowledge is a big veil.

It is a fact that purgation of innerself cannot be done on our own. For purgation of innerself, one does need guidance and company of Murshid who holds the status of ‘the man of Divine Command’. Like the Sultan ul Sabireen, the Murshid of Pir Mohammad Bahadur Shah. Because only a perfect spiritual guide is fully aware of the Satanic illusions and traps.

Explanation: Pir Mohammad Bahadur Shah in this piece of poetry says that I had forgotten the promise of Alast. (The promise made to Allah, when He bestowed all souls with Divine vision and asked: اَلَسْتُ بِرَبِّکُمْ , meaning: “Am I not your Rab (Creator and Sustainer)?” The souls replied, قَالُوْا بَلٰی, meaning: “Yes! You are”).

Pir Mohammad in this piece of poetry while talking about the beneficence of his Murshid, Sultan ul Sabireen says when a seeker of Allah with true and complete faith goes to my Murshid, he blesses him with Divine vision and gnosis. Undoubtedly, Allah is closer to our jugular vein. But only those experience it who have firm faith in the beneficence of their Murshid. As Allah says in Quran:

Only those seekers of Allah who have a strong faith on their Murshid can understand the reality of this verse. Because only then they feel Allah near themselves. As Allah says in Quran:

When seekers of Allah find Him within themselves according to the aforementioned verse, they become honorable in both the worlds because they manifest the an-Nur of Allah. O Sultan Bahadur Shah! Your Murshid, Sultan ul Sabireen, is in fact the all-powerful but the ignorants do not have the wisdom to understand this fact.

Allah Almighty is Concealed in Every Human Being

It is a fact that Allah Almighty is concealed in all human beings. But because of the filth on the innerself, we cannot see Him. Thus, one just needs to work on removing the veils between the an-nafs and the soul to have Divine vision. However, this is possible only through the spiritual attention of the Murshid and invocation and contemplation of Ism e Allah Zaat. The fortunate seekers of Allah who get purgation of their innerself in the sacred company of a Murshid can attain the gnosis of Allah and reach the actual status of human. Those who are unable to understand the grandeur and rank of the Murshid can never attain gnosis of Allah. Rather such people can not even attain Allah’s proximity.

Explanation: Sultan ul Sabireen is the perfect Fakir who is at the level of being immortal with Allah. Pir Mohammad Bahadur Shah says I have no doubt that obeying Murshid is in fact obeying Allah and the lover of Murshid is actually the lover of Allah. This is surely the right way to reach Allah which is followed by all the Saints and knowers of Allah. The first obligation upon the seekers of Allah is to obey their Murshid while other prayers have secondary importance. However, those who take pride in their apparent knowledge and consider it enough for their guidance, do not like to adopt this way.

For the seekers of Allah, love of Murshid is in fact true prayer. As through Murshid they attain Divine proximity. Thus, such seekers do not engage in hard mystic prayers, rather they remain busy serving their Murshid day and night. The seekers who annihilate in their Murshid, in fact annihilate in Prophet Mohammad and reach the status of annihilation in Allah and being immortal with Allah.

Those who think they do not need a perfect spiritual guide for Divine Union, and they can reach Allah based on reading just Quran and Hadith are in fact far from the fragrance of Faqr.

Explanation: The attention of Murshid Kamil is like an alchemy. It can convert a sinful person into a friend of Allah and an ignorant person into a scholar of the Divine Knowledge. If he casts a glance over a non-believer, he changes him to a perfect knower of Allah. As Allah says in the Holy Quran:

Hence, it is an obligation upon the believers to search a source to reach Allah and that source is Murshid Kamil who knows the way to Allah. O Sultan Bahadur Shah! All the Divine Secrets will be revealed upon you when your Murshid, Sultan ul Sabireen will bless you with his sacred attention.

It is by virtue of the spiritual attention of the Murshid that the darkness of the inward is purified, and the seeker becomes capable of Divine vision and union.

Explanation: Can you imagine what spiritual powers the Universal Divine Man (Murshid Kamil) holds? His spiritual attention can change the destiny of the seeker. (Meaning change the seeker of world to seeker of Allah).

Even in Quran, Allah ordains as follows:

Meaning: O believers! Fear Allah persistently and find medium (to approach and get closer to) Him. (5:35)

According to Mystics and Sufis, in the above verse, medium means perfect spiritual guide. When the seeker of Allah goes to the court of the perfect Murshid with sincerity, then Murshid reveals the Divine secrets upon him. Until and unless the seeker is accepted as a sincere seeker in the court of Murshid, he does not gain gnosis and proximity of Allah. Certainly, only the spiritual attention of the Murshid takes the seeker on the journey of Faqr. Without that, a seeker may not progress a single step on the path of Faqr.

The traits and qualities of Murshid that Pir Mohammad Bahadur Shah has mentioned in his poetry, are clearly present in Sultan-ul-Ashiqeen, who is the perfect spiritual guide of the present era. Therefore, those who wish to achieve gnosis of Allah and get on the path of Divine love are invited to take oath of allegiance on the hands of Sultan-ul-Ashiqeen. As his spiritual attention will sanctify their innerself and cleanse the inward from the filth of the worldly desires.

Join Tehreek Dawat e Faqr to get the benevolence of the Imam of era, Sultan-ul-Ashiqeen and attain the limitless treasure of Faqr. Ameen.