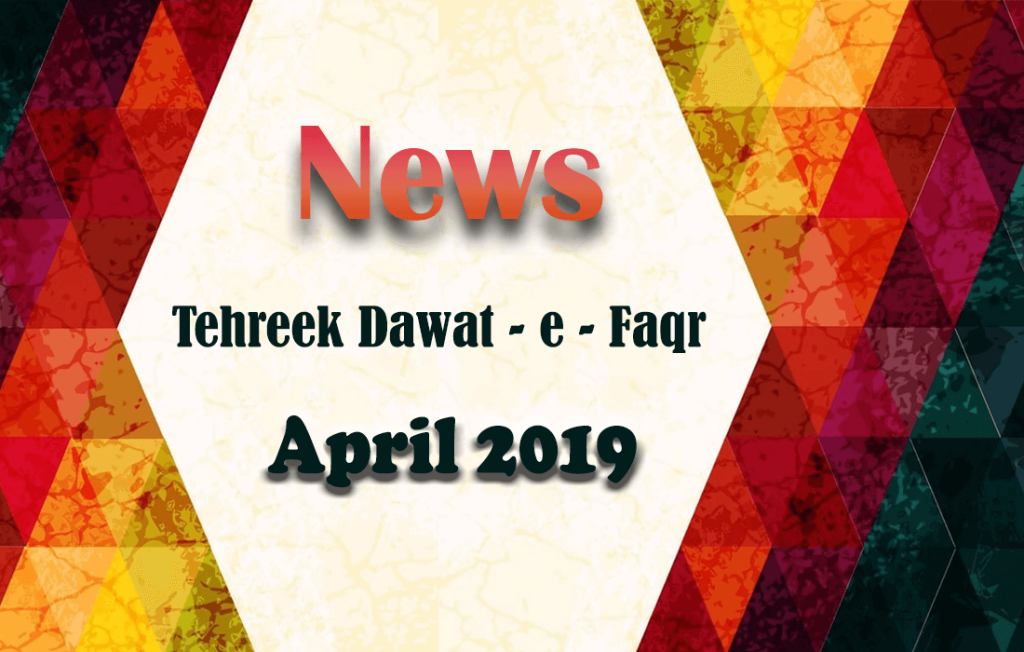 Sultan-ul-Ashiqeen Hazrat Sakhi Sultan Mohammad Najib-ur-Rehman is undoubtedly the present spiritual leader of Sarwari Qadri Order of Sultan Bahoo RA. He is the patron in chief and founder of Tehreek Dawat-e-Faqr as well. Also he is busy working day and night to spread divine favors and Blessings of the personal name of Allah (Ism-e-Allah Zaat). Resultantly hundreds of devotees from all over the country take part in the activities to spread the teachings of Faqr through all means including the Tehreek Dawat e Faqr website wing. We invite you to join Tehreek Dawat e Faqr.

Below, we are presenting some of these activities for you. As always we are mentioning activities of disciples of Sultan-ul-Ashiqeen, main and regional offices of Tehreek Dawat-e- Faqr in the month of April:

After the gathering people had langar, the sacred food. Also Many male and female devotees got the opportunity to take oath of allegiance at the sacred hands of Sultan-ul-Ashiqeen. Moreover  they got the blessing of invocation and contemplation of Ism e Allah Zaat. After Zuhr prayer the caravan went to the sacred shrine of Shahbaaz-e-Arifaan Sultan Pir Syed Mohammad Bahadur Ali Shah. At the shrine hundreds of seekers of Allah welcomed Sultan-ul-Ashiqeen and benefitted from his boundless spiritual beneficence. Finally the caravan returned to Sultan-ul-Ashiqeen house and reached there at 8:15 pm.

Tehreek Dawat-e-Faqr is working day and night to spread the teachings of Faqr. The sincere and untiring hard work of the disciples under the supervision of Sultan-ul-Ashiqeen has resulted in increasing the circle of his followers extensively. Conclusively, thousands of people are being blessed with favour of Ism-e-Allah Zaat after taking oath of allegiance at the hands of Sultan-ul-Ashiqeen. In order to improve the preaching department, it was important to reorganize the regional offices of Tehreek Dawat-e–Faqr. Therefore, to accomplish this important task a three member delegation was formed by the permission of Sultan-ul-Ashiqeen and the administrative committee. The delegation mainly comprised of general secretary of Tehreek Dawat-e-Faqr Dr.Abdul Haseeb Sarfaraz Sarwari Qadri, incharge of department of invitation and preaching Mohammad Arshad Ramzan Sarwari Qadri.

On Friday 29th March, the delegation departed from the main office of Lahore for one day tour to the regional office of Okara. There were three aims of the tour; firstly to collect the data, secondly to solve the problems faced by the members and officials and lastly to reorganize the party in the light of those problems. All the organizational affairs were basically to be settled at the house of Prof. Shakeel Ahmed Sarwari Qadri who is an active member of Tehreek Dawat-e-Faqr Okara. All the companions were already present at  Shakeel Ahmed’s place. He warmly welcomed the members of delegation who arrived from  Lahore office.

A small gathering of encomiums was also arranged. After the encomiums, Arshad Razman Sarwari Qadri gave a speech about the importance of spiritual guide and the virtues of spending in the way of Allah. After the speech and before beginning discussion on the performance of regional parties, the general secretary Dr. Abdul Haseeb Sarfaraz shed light on all departments of Tehreek Dawat-e-Faqr and their importance.  Afterwards they reorganized the regional office.  The names of newly choosen officials are:

In this meeting advisory committee of Tehreek Dawat-e-Faqr was also formed. Names of its members are:

On Friday 05th April, the administrative committee of Tehreek Dawat-e-Faqr visited the regional office of Mandi Buchiana and held a meeting. Before the arrival of administrative committee all the officials and fellow disciples of Mandi Buchiana were present there. Basicaly The meeting was held under the presidentship of chief executive of Tehreek Dawat-e-Faqr Malik Mohammad Naeem Abbas Khokhar Sarwari Qadri. Moreover they took steps to improve the performance of regional office which also included reorganization of its officials.

Firstly they  recited  verses of Holy Quran. Then the members of meeting gave suggestions to make Tehreek Dawat-e-Faqr progress. The chief executive Malik Naeem Abbas khokhar listened to the suggestions very carefully and made sure to carry them out as soon as possible. Therefore he  gave important instructions to the members of meeting and advised  them to be united and work harder to invite people towards Faqr. Lastly, the central management gave farewell greetings to all the members and congratulated the newly selected members and officials.

Monthly meeting of the General Council

On Sunday 07 April, there held a meeting of general council of Tehreek Dawat-e-Faqr at the main office Lahore.  Hence, members from all over the country joined this meeting.

First of all verses of Holy Quran were recited.  After the recitation, Waseem  Akram Sarwari Qadri, the president of general council announced the agenda of the meeting. As it reflected on the current performance of departments of Tehreek Dawat-e-Faqr and the planning and strategy for the future. So, The members discussed every point of the agenda in detail.  Also, every member was given the opportunity to present his suggestion. Conclusively, the points which members appreciated were sent for approval to the advisory committee according to the Tehreek’s law.

On Friday 5th April, Tehreek Dawat-e-Faqr Jhelum also displayed a stall of books of Sultan-ul-Faqr Publications and monthly Sultan-ul-Faqr magazine outside Dar-ul-Uloom Jamia Mosque. After the Friday prayer people of the area and devotees showed great interest in the stall. Monthly Sultan-ul-Faqr Magazine was mainly the center of attention for  people.They also got information about membership of the magazine.

On Friday 12th April, the regional office again displayed the stall of books of Sultan-ul-Faqr Publications and monthly Sultan-ul-Faqr Magazine near Dar-ul-Uloom Jamia Mohammadia Zia-ul-Islam Kala Gujjaran. Locals especially the youth showed interest in books of Sultan Bahoo. They admired this step a lot and also bought the mystic books based upon gnosis and Divine secrets fervently.

No doubt Tehreek Dawat-e-Faqr Haroonabad is proving its capabilities expeditiously. Moreover, new members are also taking part in the activities of Tehreek wholeheartedly and are cooperating to spread the mission of Mohammadan Faqr. Recently a great number of male and female devotees from Haroonabad acquired the blessing of invocation and contemplation of Ism e Allah Zaat and took oath of allegiance on the hands of Sultan-ul-Ashiqeen.

On Friday 5th April, Tehreek Dawat-e-Faqr Haroonabad displayed a stall of books of Sultan-ul-Faqr Publications and monthly Sultan ul Faqr Magazine as well. Exclusively many people visited the stall. Two of the books written by Sultan-ul-Ashiqeen, Haqeeqat  Ism-e-Allah Zaat and Haqeeqat-e-Mohammadia were the center of attention. Other than these, two newly published books of Sultan-ul-Faqr Publications Bayat ki Ehmiyat aur Zaroorat and Khanqah Silsila Sarwari Qadri were also sold in large number.

On Friday 19th April, Tehreek Dawat-e-Faqr Islamabad set a stall in Baag-e-Sardaran Mosque Rawalpindi also. As a result, the devotees admired the books of Sultan-ul-Faqr Publications a lot.

These news of Tehreek Dawat-e-Faqr are published in May 2019 issue of monthly magazine Sultan-ul-Faqr, Lahore. Zainab Moghees Sarwari Qadri has translated this article. For study in Urdu please click the link: