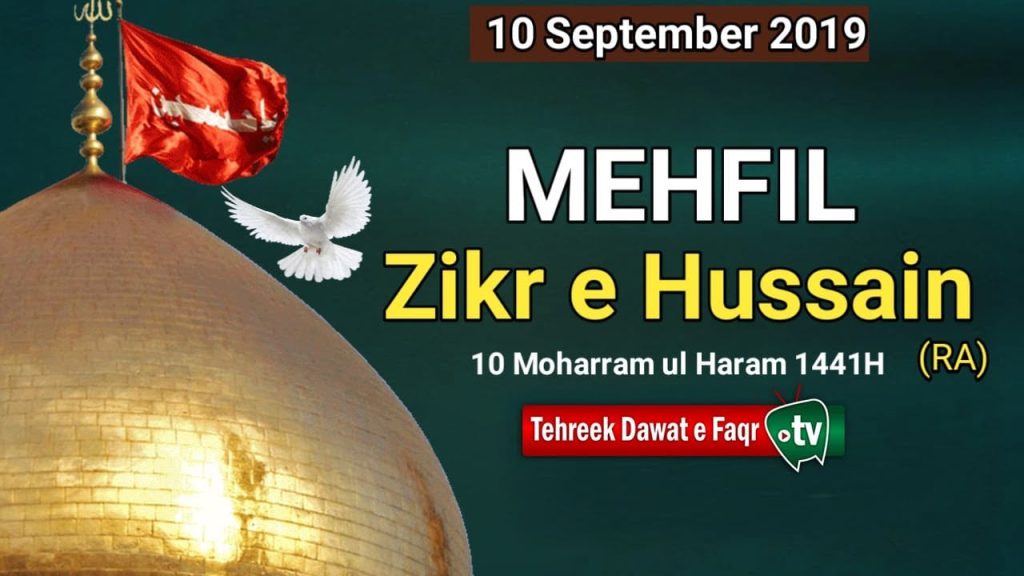 Every year on 10th Muharram, Tehreek Dawat-e-Faqr commemorates the great sacrifice of Imam Husayn and his loyal followers during the battle of Karbla. Keeping this tradition, Tehreek Dawat-e-Faqr organised a blessed ceremony in this regard on 10th September 2019 (10th Muharram, 1414 H) at the khanqah of Sarwari Qadri order in Lahore. Patron-in-Chief of Tehreek Dawat-e-Faqr, Sultan-ul-Ashiqeen presided over the ceremony. The event was to begin after Zuhr prayer. However the devotees began to arrive from early morning. Sultan-ul-Ashiqeen’s son and his spiritual successor Sahibzada Sultan Mohammad Murtaza Najib had arrived in the khanqah well before the start of the event.

As usual, Sultan-ul-Ashiqeen met with female disciples first at his house and then departed to attend the event in the khanqah where the male disciples had gathered and were eagerly waiting to see their beloved spiritual guide. As Sultan-ul-Ashiqeen entered the khanqah, the devotees present there warmly welcomed him. They chanted slogans in praise of Sultan-ul-Ashiqeen to express their gratitude and happiness. First of all, Sahibzada Sultan Mohammad Murtaza Najib greeted his father and spiritual guide, followed by Naeem Abbas Sarwari Qadri and then Dr Hasnain Mehboob Sarwari Qadri.

As it was Zuhr time, Maulana Mohammad Aslam led the prayer. Following the prayer, Sultan-ul-Ashiqeen seated on his chair and the ceremony began. Once seated, he met with the disciples who had come from distant areas. During discussion, he enquired them about Tehreek Dawat-e-Faqr activities in their areas.

Proceedings of the Ceremony

Whilst compering the ceremony, Naeem Abbas Sarwari Qadri requested permission from Sultan-ul-Ashiqeen to begin the event and then invited Maulana Mohammad Aslam Sarwari Qadri to recite few verses from Holy Quran. He recited verses 153 to 157 from Surah al-Baqarah and translated these for the audience.

Meaning: O believers! Always seek help (from Me) through patience and Prayer. Certainly, Allah is (always) with those who observe patience. And do not say about those who are slain in the cause of Allah that they are dead. (They are not dead.) They are rather alive but you have no perception (of their life). And We will most certainly test you somewhat by means of fear and hunger and certain loss of wealth and lives and fruits. And, (O Beloved,) give glad tidings to those who observe patience. (They are the ones) who, when afflicted with some distress, say: ‘Indeed, to Allah we belong and to Him we shall return.’ It is they upon whom are bestowed successive blessings and mercy from their Lord. And it is they who are the guided ones. (al-Baqarah 153-157)

Maulana Mohammad Aslam recited these verses beautifully and then gave a very comprehensive explanation that the audience highly appreciated. Dear readers! It is in fact the marvel of a perfect Fakir that when the Holy Quran is recited in his presence, one feels its theophanies and beneficence on their inwards.

Following the Quran recitation, Mohammad Ramzan Bahoo came on stage and read a beautiful eulogy in praise of the Holy Prophet.

It is such a beautiful eulogy that every word of it felt like descending on the inwards of the audience who were weeping whilst listening to it.

After that, Ramzan Bahoo once again came on stage and read few couplets from Sultan Bahoo’s Punjabi Abbyat. He read the below:

Sultan-ul-Ashiqeen explained the meaning of this couplet in a very comprehensive but easy to understand way. He said, “Many people believe that Imam Husayn was oppressed and helpless in front of his enemies. This is not the case at all. Imam Husayn was a perfect and accomplished Fakir and Man of Divine Essence of his era. He had Divine authority and could have destroyed his enemies in no time had he wished so. Instead he surrendered completely to the will of Allah Almighty and born all the atrocities only for the sake of Allah’s pleasure. He didn’t even complain to Allah about the pain the sufferings he and his family endured.”

To explain the importance of surrender and submission to the will of Allah, Sultan-ul-Ashiqeen asked Maulana Mohammad Aslam to narrate the example of Khawaja Ghause Mohammad Gwaliyari. Maulana went on to say, “Khawaja Gwaliyari was a highly accomplished Saint but when he saw his granddaughter in pain, he couldn’t restraint. Whereas on the other hand, Imam Husayn saw his family members being martyred in front of his very own eyes but he didn’t say a word of lamentation.”

Closing of the Ceremony

After the short speech, Maulana Mohammad Aslam read Khatam and Mohammad Farooq Zia made a special supplication for the martyrs of Karbla. He also made supplication for the attendees and people who contributed in organizing the event. In addition, he prayed for peace and prosperity of Pakistan. This followed by a closing eulogy in honour of the Holy Prophet and final supplication.

The devotees enjoyed a special meal that was especially for the event.

The information and broadcasting department of Tehreek Dawat-e-Faqr has published these news in collaboration with Sultan-ul-Faqr Publications. Your feedback is welcome in improving the quality and content of the news. You can provide your suggestions on feedback@tehreekdawatefaqr.com or you can write to on the below address:

Department of Information and Broadcasting