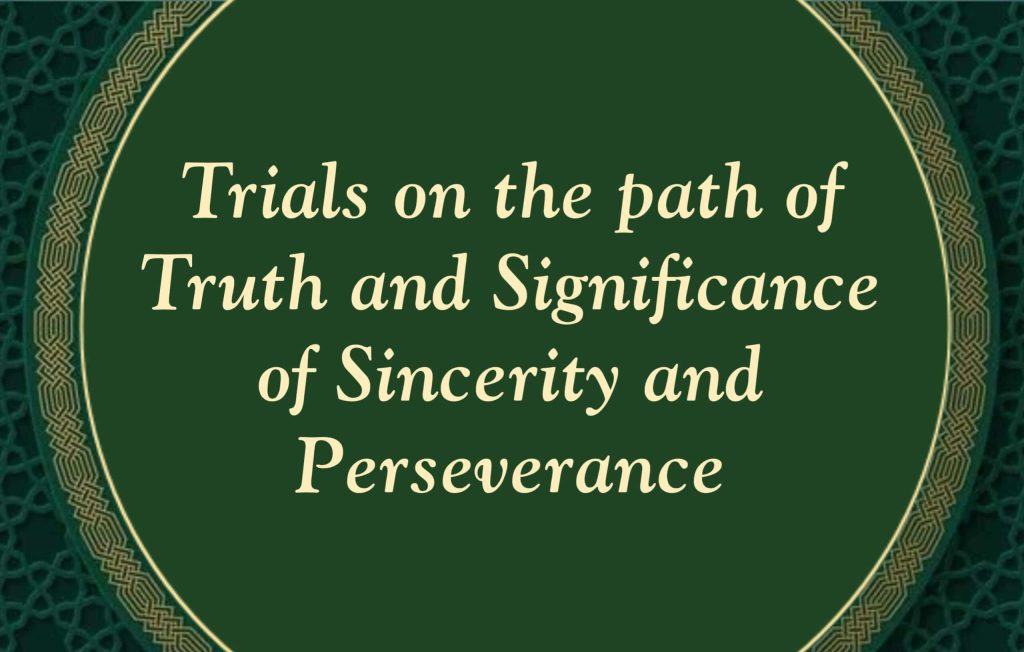 Trials on the path of Truth and Significance of Sincerity

Allah longed to have someone who would recognize Him and love Him ardently. He desired to manifest His beauty and majesty. So, He created the creation.  In a Qudsi Hadith He says:

Meaning: I was a hidden Treasure, I intended to be recognized so I created the creation.

The foremost purpose of human creation, therefore, is the recognition of Allah. Only those remain successful who strive to achieve this great purpose in their life and remain perseverant in it. This path to Divine gnosis is the straight or the righteous path. The true success is to strive hard to reach the righteous path then stay there and achieve success in it with Allah’s favor.  Allah says in the Quran:

Meaning: And those who have believed and have done pious deeds, it is they who are the inhabitants of Paradise. They shall live there forever. (Al-Baqarah – 82)

Allah created humankind solely to acquire Divine gnosis and union. Therefore, he must seek in both the worlds what he is created for. Lest his life be wasted in vain and has to regret on it after death. (Sirr al-Asrar)

The source of attributive gnosis is the daily recitals, invocation, reflection, forty days seclusion and the physical and verbal hard mystic exercises but the source of the gnosis of Divine Essence is only the invocation and contemplation of Ism-e-Allah Zaat. The extreme destination of gnosis of attributes is the conversation with Allah at the lote tree and reading the Guarded Tablet while the early stage of gnosis of the Essence is annihilation in Allah and the eternal presence in the Mohammadan Assembly. (Sufism – The Soul of Islam)

Trails on the straight path

The traveller of the straight path undergoes various trials, challenges, and hardships. Sometimes the circumstances are in his favor while other times they become opposite to his actions, nature and habits. Sometimes Allah bestows him with honor and other times passes him through tough trials. A true and sincere seeker is the one who patiently endures all the sufferings and trials and keeps his entire focus on attaining the path of Truth.

Meaning: And We will most certainly test you somewhat by means of fear and hunger and certain loss of wealth and lives and fruit. And (O beloved,) give glad tidings to those who observe patience. (Al-Baqarah – 155)

Sultan-ul-Ashiqeen says about a true seeker who patiently endures sufferings in the path of Truth:

Importance of sincerity and perseverance in the time of trials

Achieving perseverance and success in the path of Truth is possible with sincerity of intention and Divine favor.

Meaning: Surely, We have revealed (this) Book to you with the truth. So worship Allah for His sake alone in sincere obedience. (Al-Zumar 2)

The Holy Prophet (peace be upon him) said:

Sayings of the Saints on sincere intentions:

The perfect Fakirs who are the true spiritual successors of Holy Prophet pbuh, also call purity of intentions to be essential in Faqr (Sufism) along with perseverance and Divine favor.

True intention and sincerity are very essential in the path of Reality. The acceptance of a good deed in the court of Allah depends upon the degree of truthfulness and sincerity a person possesses while performing it. It is the Hadith of Prophet Mohammad pbuh, “The intention of a believer is better than his act. (Sultan-ul-Faqr VI Sultan Mohammad Asghar Ali-Life and Teachings)

He who loved Allah lived, and whoever leaned towards the world remained deprived. The fool spends his days in ignorance and the wise finds his own flaws. (Mukashifat-ul-Quloob)

It is necessary for the traveler of the righteous path to account for his inner state, deeds, and words and ensure that his innerself does not act rebellious to Allah.  He must not utter any words from his tongue for it is pointless to utter words without inner intention.  Intention is associated with the inward. Words are only a way of expressing it. So unless there is a heartfelt love for Allah, it cannot be an intention. (Awarif ul Ma’arif)

The more purity of intention and humility there is, the sooner one becomes closer to Allah, and the closer he is, the more humble he will be, provided there is sincerity in his intention. (Sultan-ul-Ashiqeen)

The exact opposite of the truth is falsehood. It is not just idolatry and evil deeds, rather its roots begin to flourish within inward from negative thinking, satanic whispers, beliefs, and ideas. Satan’s attacks on the esoteric self through falsehood. The truth is from eternal and will remain for eternity. However, falsehood is mortal and will perish.

Falsehood is of three forms, and it dominates the man in any of these forms. Its first form is the innerself (when it is not purified), second form is Satan, and the third form is world.

He (Iblis) said: ‘Since You have led me astray, (I swear that) I will (also) sit on Your straight path (to waylay the children of Adam till I cause them to deviate from the path of truth).‏ I will assuredly approach them from their front, from their rear, from their right and from their left, and (consequently) You will not find most of them grateful.’ (Al-A’raf 16,17)

Satan is an enemy of man. He always employs new tactics to detract the seeker of Truth from the right path and divert him to falsehood. His greatest weapon is the inciting innerself, which he pollutes with desires and lusts and subdues it with the whispers of fear and danger.

Sultan-ul-Ashiqeen describes the evil attacks of Satan on the inwards as follows:

Incident of domination of Satanic whisper on a disciple

Once Shaikh Abu Saeed was going to Tus from Nishapur with one of his disciples and on the way he passed through a gorge. It was so cold that Shaikh Abu Saeed’s feet became very cold. A thought occurred to the disciple to tear his cloak, cut it in two and wrap it around the Shaikh’s feet. Because his cloak was beautiful and precious, his heart did not allow to tear it.

The disciple states that when they reached Tus, he asked the Shaikh, “O Sheikh! What is the difference between satanic whispering and Divine inspiration?” Shaikh replied, “Divine inspiration was the one in which you were commanded to tear the cloak into two pieces and wrap it around my feet so that my feet would not get cold. And satanic whisper was what stopped you from doing it.” (Kashf ul-Mahjub)

Sultan Bahoo states in his book Ain-ul-Faqr about the seeker of the world:

In short, any thought, action and knowledge that leads man to the path of Allah’s closeness is the path of Truth and the deeds which make him a follower of worldly pleasures, desires of the innerself and Satan are falsehoods. One can differentiate between the path of Truth and falsehood and can stay on the righteous path only when he completes the stages of self-purification in the company of perfect and accomplished spiritual guide.

In this materialistic age, everyone is stressed out. The solution lies in following the spiritual path because spirituality is free from falsehood. Unfortunately, many people refuse to accept that the company of perfect Fakirs is necessary. They consider only outward worships and salutations to be the purpose of their life. Rewards can be gained from the outward acts of worship performed sincerely, but Allah’s love and closeness is only possible with the invocation and contemplation of Ism-e-Allah Zaat in the company of perfect spiritual guide.

Sultan-ul-Ashiqeen Sultan Mohammad Najib-ur-Rehman is the present perfect spiritual guide of and the spiritual successor of Holy Prophet. Allah has blessed him with the most elevated status of al-Insan al-Kamil, the Universal Divine Man.

He guides the seeker of Allah on the righteous path the very first day by granting the invocation of the greatest name of Allah (Ism-Allah Zaat). He sanctifies the inwards of seeker with his perfect spiritual sight. Those who benefit from the company of Sultan-ul-Ashiqeen feel at peace inwardly.

It is an open invitation to everyone to come and benefit from the spiritual company of perfect spiritual guide Sulan-ul-Ashiqeen and begin their journey towards Divine gnosis.