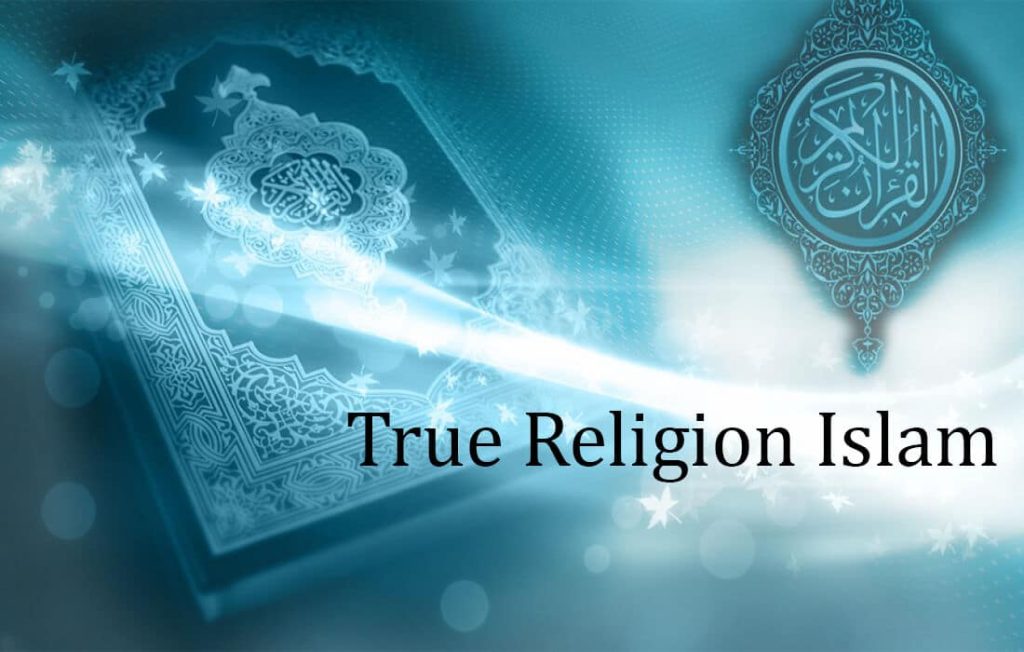 There are hundreds of religions that people follow all around the world. Follower of every religion believes that only his religion is true and right. Moreover, most people think that Islam religion is to only worship and perform prayers whereas it is a complete way of life. It provides guidance in every department and aspect of life. Nowadays, it is believed among the majority of the Muslim society that exoteric devotions is complete religion i.e. prayer, fast, hajj, zakat etc. They do not know the importance of religion and think that merely performing these physical devotions is faith and belief. Prayers and devotions are only its part however Islam is a perfect and comprehensive religion.

“(In the beginning) all the people agreed upon the same Din (Religion. And later, when differences emerged amongst them,) Allah sent His Messengers as Bearers of good news and Warners and sent down with them the Book based on truth, so that it might judge those matters amongst the people in which they had developed differences. Then, only those very people whom the Book was given differed about it, despite the fact that the clear signs had come to them. (And they differed also) because of mere jealousy and malice amongst themselves. Then Allah, by His command, made the believers understand that matter of truth about which they had differed. And Allah guides whom He pleases to the straight road.” (2:213)

Quran also says not to follow your forefathers instead contemplate yourself upon what is true and right and then follow it.

Faqr is when Soul takes over physical body

According to my spiritual guide Sultan-ul-Ashiqeen Sultan Mohammad Najib-ur-Rehman true religion is when esoteric self of a human overtakes the exoteric self.

Moreover, Holy Prophet (pbuh) said, “When Allah blesses someone He makes him understand the religion and shows him flaws of his innerself.”

Understanding religion is a source to recognise the innerself. Furthermore, ardent love for Holy Prophet (pbuh) is religion which begins with respect and ends at love. To reach Holy Prophet (pbuh) is religion. Therefore, Allah had sent Prophet Mohammad (pbuh) to prevail Islam in the world. Following religion perfectly means dominating the love of religion upon all other loves and desires. When this love overtakes and burns all other loves and affections then it will become ardent love. However, ardent love cannot emerge unless our innerself is purified and we can never perform self-purification ourselves. Only a perfect spiritual guide can do the purification of our innerself.

Holy Prophet (pbuh) rooted out the desires and love of the world from the inwards of his Companions with his perfect glance and sacred company. Thus, he purified their innerselves until they reached the station of innerself at peace. After Prophet Mohammad (pbuh) passed away, Prophet-hood ended then Allah initiated sainthood. So people who travel on the right path can perfect religion through the mediation of Saints. In every era Allah sends one Universal Divine Man, who is on the footsteps of Holy Prophet (pbuh), whose task is to guide people towards true religion. A new Universal Man is appointed when the preceding one passes away.

Sultan-ul-Ashiqeen Sultan Mohammad Najib-ur-Rehman is the perfect spiritual guide of present era. After pledging the oath of allegiance he grants Ism-e-Allah Zaat to his disciples. Through contemplation of Ism-e-Allah Zaat and inscribing Allah’s name on the body under his supervision, he purifies inner self of his disciples and grants them the gnosis of Allah i.e. Human Miraj and takes them to the Mohammadan Assembly. Therefore, religion can never be completed without attaining gnosis of Allah and Mohammadan Assembly. As Allah says in Holy Quran:

“And whoever turns away from the remembrance of the Most Kind (Lord), We appoint a Satan to dominate him and stick to him constantly. And these (Satan) hinder them from the path (of guidance), but they maintain the wrong perception that they are on the path of guidance. Until when he will come to Us, he will say (to his companion, Satan): ‘Alas! Would that there had been between me and you the distance of east and west; So (you were) the most evil companion indeed!’”

In aforementioned verse Allah says that when a child reaches the age of maturity and does not ponder upon the fact that who is he? Where does he come from? Who created him? And remains busy in this world. He does not even try to know about his Creator or His religion. If he knew, he would not have forgotten Allah.

Allah says about such heedless person that when he turns away from Allah and remains involved in this world then I appoint a Satan with him who becomes his companion and misguides him. Religion will banish from his inward and there will remain no faith and belief in him. And when he will die he will say Alas! I wish I had recognised Satan in the world so I had not been misguided. And he will also say Alas! I wish that there had been the distance of east and west between us because you have ruined my world and hereafter. You are the worst companion.

The time has ended now. There is nothing left except regret. Now the day of judgement has arrived, either you will go to heaven or hell. Whatever happened, it cannot be reversed.

Prioritising Allah over everything

However, Satan was never a sinner instead he was a scholar. The only sin he committed was he did not obey Allah’s order in arrogance. However, if we do not make our innerselves strong through purification we can never understand our true religion. For this purpose we need to find alive and eternal perfect spiritual guide because only he knows all the flaws of our innerself. Without complete submission to spiritual guide, one’s innerself cannot be purified.

Therefore, no matter how regularly we perform prayers and devotions we can never attain Allah’s closeness until we put Allah over our wealth, children and desires.

To follow true religion we must find out who we are? And why we came into this world? We all have a soul inside us and it needs sustenance to get stronger, which is love of Allah. However, without love of Allah we can never prioritise Allah’s will over other things. Prioritising Allah’s will means to live our lives according to His will, make decisions and do things that He likes. Moreover, way of thinking of our families, society and this world is not same because everyone has different ideologies and way of thinking. So when we will make decisions preferring Allah’s will, our standards of living or way of living might change. Therefore it is possible that families and society may disagree or oppose but we should stand up to all the opposition and hindrance for love of Allah.

“And let them be forsaken who have made their own din (religion) a sport and pastime and who have been deceived by the worldly life. And continue to exhort them (for their awareness) by means of the (Qur’an), so that no soul gets consigned to ruin as a result of its doings. (Then) there will be neither any helper nor any intercessor for him apart from Allah. And even if that (soul) atones (for its sins) full recompense (i.e., ransom), that will not be accepted from it (at all). It is they who are destroyed in consequence of their doings. For them is drinking of scalding water and a torturous torment because they used to reject faith.” (6:70)

According to this verse people do not understand true religion neither try to understand it. Allah says about people who are busy and so much involved in their worldly life and don’t take religion seriously that they do not have any relationship with such people and guide them through Holy Quran. On the day of judgement they will say to Allah to take all their wealth and property which they have left in the world. That day Allah will not accept. These are the people who dug their own grave and will go to hell where they will have to drink boiling water and endure agonising torment. As all they did in their worldly life was nurture and worship their physical body. Whatever their body wanted, they provided for it whereas they provided nothing for their soul which is truth.

Sustenance of their soul is Divine vision and gnosis which can only be attained with the help of spiritual guide. However, they never even tried to find the perfect spiritual guide in their worldly life who would have purified their innerself and made their soul stronger. Because soul is eternal and will be answerable in the court of Allah whereas this physical body will be buried and remain in this mortal world.

Allah only forbids you to befriend those who fought against you on (account of) the Din (Religion) and drove you out of your homes (i.e., homeland) and aided (your enemies) in expelling you. And whoever makes friends with them, it is they who are the wrongdoers.”

In aforementioned verse, “fight against you on religion” means that when we are inwardly linked to the perfect spiritual guide. We sacrifice our lives (obtain death before dying) and wealth in way of Allah and consign all our authorities to him because he follows true religion and guides accordingly. During this we have to abstain from anything which creates obstacles while travelling true path. Not only our inner self but also our families stop us from spending money in way of Allah. Even if it comes to leaving families behind for Allah just as Holy Prophet (pbuh) migrated from Makkah with his Companions.

Religion in general is the moral and ethical code but moreover it is the way to connect with God and find the purpose of life.

Religion Islam is the complete code of life with rules varying from spirituality to each and every physical matter. Otherwise there will be complete turmoil and chaos because of lack of ethical and moral rules to lead life.

This is translation of an Urdu article of the magazine “Mahnama Sultan-ul-Faqr Lahore” for the month of January 2021. Originally penned by Rubina Farooq Sarwari Qadri is presently translated in English by Sahibzadi Mishal Najib Sarwari Qadri exclusively for the website. Do not forget to visit the original article to which you only have to click the link: